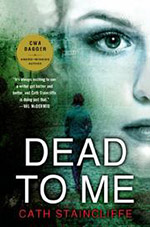 Minotaur does a good job picking up and publishing British police procedurals and this is one of their latest finds – a genuine, no-holds-barred procedural with not one central female character, but three, which makes it a bit different.  The men in the book are either villains, eye candy, present or ex husbands, or sidebar co-workers.  It’s the women Staincliffe is interested in and that sets this novel apart.

It’s labeled on the cover a “Scott and Bailey” novel which gives things away a bit as the two main characters, Janet Scott and Rachel Bailey, are immediately front and center.  Janet’s boss, Gill, encounters Rachel on a crime scene and likes her enough to ask her to join her elite homicide team, which is Rachel’s dream job.  Janet is older, seasoned, experienced and irritated with Rachel, who is like an overeager puppy, charging in and acting without thinking.  Part of the novel is definitely concerned with Janet and Gill’s efforts to “train” her to act like a grown up police officer.

The case the two catch is the murder of a young heroin addict, found stabbed in her apartment by her boyfriend and dealer, who was so distressed when he found the body he’s covered it with the duvet from her bed.  This is a genuine procedural as you follow the entire detective team as they carefully go through evidence and suspects to hit the right one.

If you’re a fan of Prime Suspect you should enjoy this novel, which follows the same formula.  Luckily it’s an iron-clad and fascinating one, and the layers of poverty, abuse, and drug use the women uncover are heartbreaking.  Part of Rachel’s training is learning to detach her emotions so she can function on the job.  It’s a hard and believable battle as portrayed by Staincliffe.

There’s some humor and Staincliffe portrays the home lives of all three women vividly, so that you remember each one distinctly.  I’m sure there’s much more to discover about Rachel’s boyfriend, but it just makes me want to read the next novel even more.  The story wrap-up was both unexpected and well founded, and all in all, this was a completely enjoyable read.