Robert Crais is hands down one of the absolute best writers of action.  That’s not an easy thing to do, though he makes it look that way.  The miracle of his writing is that he combines the action of his stories with some real emotional punch.  If, when you finish this book, you aren’t a) crying your eyes out, and b) wishing you had a dog (if you don’t already have one), there’s something the matter.  I heard Crais at a conference say that he starts every story with something that breaks his heart, and this one has a whopper of a heartbreaking beginning. 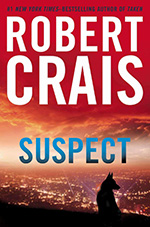 Maggie, a German shepherd trained to find IEDs, is in Afghanistan with her handler, Pete.  For Maggie, Pete is her whole world and she will do anything to please him.  As Crais shifts between Pete and Maggie’s point of view, it’s clear that Maggie views Pete as “pack”, and Pete, in turn, loves his dog.  They are making their way down an Afghani road sniffing out danger when they encounter a herd of goats – and their herders.  In the ensuing chaos, Pete is killed, and the injured Maggie has to be dragged away from his body and airlifted out for medical attention.

Fast forward several months, and we meet Scott, a police officer who has lost his partner in a terrible shoot-out where he himself was injured,  Instead of taking a “medical” and retiring, he’s chosen the K-9 unit.  It doesn’t take a big leap to figure that Scott and Maggie, both suffering from PTSD, will form a unit.

Scott is understandably obsessed with finding his partner’s killer, and he is surprised when he’s called into Homicide to talk to the new detectives in charge of his case, Orso and Cowley.  He agrees to meet with them though he’s been unimpressed with the work so far.  Meanwhile, he’s undergoing therapy to help him recall the events of the evening, and he’s able to begin sharing a few new details with the new detectives.

As Maggie and Scott begin to forge a connection – Maggie views Scott’s tiny apartment as their mutual crate – Crais is able not only to get under Scott’s skin, but he makes a believable case for getting under the skin of Maggie.  Her essential dog nature seems absolutely authentic.

Crais is a true mystery writer and brings to his story many twists and tricky turns as the case unravels and Scott finds himself in danger.  The difference is he has Maggie with him, with her dog’s heart and dog’s loyalty.  The story is a good and solid one and the characterization and originality of Scott and Maggie make it both memorable and emotionally gripping.  There’s a final action scene where Crais switches between Maggie’s and Scott’s point of view as the events are happening that is absolutely masterful.  It’s also incredibly nerve-wracking as you worry about what the outcome will be.  This is truly a great read.