I haven’t checked in with Anna Pigeon in a few books and I see she’s gotten married (congrats, Anna!) and she seems to have morphed into a Jack Reacher-of-the-woods.  In this book she’s the coolest, most badass character you can imagine.  I was absolutely unable to stop reading. 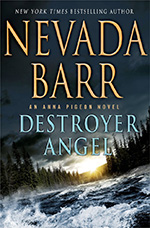 Anna has taken a bit of time away from her spouse to spend a weekend with the “girls” – two women her own age and their teenage daughters.  One of the women, Heath, is almost as badass as Anna herself, though she’s paralyzed from the waist down.  She and her daughter Elizabeth, or “E,” have a good relationship and E seems like a very level headed teen.  They’ve brought their dog, Wily, with them.

The other mother, Leah, is a brainiac in the Sheldon Cooper mode.  She’s smart but not so great with people, including her spoiled princess of a daughter, Katie, who is thirteen.  Leah is working on handicap accessible camping equipment – canoes, tents, chairs – and Heath is her test pilot.  They’re camping on the Fox River in Northern Minnesota and Anna takes off on her own one fateful evening in a canoe to enjoy the stars and moon and decompress.

As she’s returning to camp she hears shouts and knows something is up, so she hides in the woods and watches in horror as she realizes her friends are being taken hostage.  To illustrate how truly nasty they are, they even fling the dog at a tree, leaving him for dead.  If Barr had wanted to make the reader hate these guys more, that was certainly the way to do it.

As Barr relentlessly pares the story down to the bad guys – a crew run by a truly scary guy they call the “Dude” – and the good guys and how they are going to stay alive, you’re feeling the tension on every page.  It becomes apparent early on that they are after the wealthy Leah and her daughter; a kidnapping for ransom. Heath and E are saved when they tell them they have an ultra-wealthy relative, so they too are taken as kidnap victims.  They also tell them – as the men seem to know how many were in the party – that Anna had to cancel at the last minute.  She’s certainly their ace in the hole.

In many mystery novels, the puzzle seems impossible, no way to a solution.  In a suspense novel, the best and most suspenseful ones really show no way for the characters to survive, which is the case here.  As Leah retrofits Heath’s wheelchair so they can get her through the woods to the point where they’ll be picked up by a plane, their struggles to stay warm, fed, and alive are numerous.

Only Anna, in her constant vigilance mode, can spot the weak spots and take advantage of them.  She knows she’s no match for four bad guys with weapons, so she has to even the odds, even sitting back out of sight when some truly horrific things happen to the women.  She tells herself that she’s in a war situation to justify what she has to do – and you’ll agree she has to do them, though Barr certainly doesn’t sugarcoat her actions.

I really liked the feminist slant the story has – this is literally men against women, and the men certainly don’t come out on top.  As Anna, the avenging angel of the woods, works hard to save her friends, they help save themselves too, revealing strengths they didn’t know they had.  This book is a real thrill ride – of the thoughtful variety.