Mary Logue has long been one of my favorite authors and after waiting an increasingly long time between installments, I’m more than eager to pick up one of these tightly written, exciting and emotionally resonant novels.  Unfortunately I inhale them far too quickly and am forced to settle in for another long wait for the next book.  Logue’s main character is deputy Claire Watkins, who works in tiny Fort St. Antoine, Wisconsin.  She lives with her husband, the laconic pheasant farmer Rick, and her now almost adult daughter, Meg. 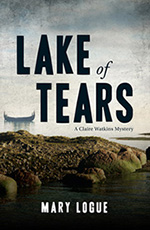 Logue’s books seem to almost exist in real time as I feel I’ve watched Meg grow up from the little girl she was in the first novels to the now young woman about to leave for college.  This story is somewhat Meg-centric, as it opens with Meg meeting a strange man at the “Burning Boat” – a town celebration where a boat is burned on the beach.  The mystery deepens when a skeleton is found the next day in the remains of the boat by a curious child.  Claire has thought the summer had gone too easily, and she’s given the double whammy of a homicide and the departure of her boss, the sheriff, for heart surgery.  She’s now acting sheriff, and uncomfortable with it, though to this reader it certainly feels like a natural progression in her career and life.

Some of the story threads appear to reach back to Afghanistan and to connect somehow to two returning vets, one of whom works for Claire and who turns out to be dating Meg, who has recently broken up with her boyfriend.  The body in the boat seems to be a missing local party girl who has a connection to both war vets.  There’s almost a surplus of clues and suspects as this energetic story surges forward.  Meg’s growth into a young woman and Claire’s growth into her job as sheriff are only part of the story; with characteristic delicacy and resonance, Logue also deftly portrays the emotional lives of the two war veterans.

Logue is as capable of breaking your heart as she is of lifting it up, and her books combine both aspects, much like life itself.  The fact that she’s able to combine this with a fast paced, well told and at times unexpected story, rattling with suspense and tension, make her books all the more worthwhile.  I think she’s a much underrated writer, and opening one of her books is always a joy.  I more than recommend giving one a try.