Laura Lippman is truly a master at what she does.  Her latest novel, a stand alone, takes a ripped-from-the-headlines story and she puts her own Lippman-esque spin on it.  The story concerns one Felix Brewer, a slick operator who decides to vanish rather than face prison time over his many unlawful misdeeds.  Lippman’s concern and interest, however, is not so much Felix as the women Felix leaves behind: his beautiful wife, Bambi; his three daughters; and his mistress, Julie.  The connecting thread is not only the women, but the cold case officer who is trying to figure out, many years later, who caused the death of Felix’s mistress ten years to the day after his own disappearance. 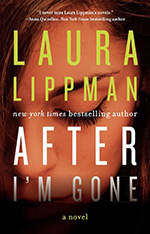 Lippman’s time scale is an epic one as she veers from Bambi and Felix’s first meeting in 1959, to Felix’s disappearance in 1976, to Julie’s death in 1986, up to 2012 when “Sandy” Sanchez is trying to solve the mystery of Julie’s death.  The narrative deftly flips from one woman to the other, in different years, giving the reader not only a full picture of the slightly skeezy and disreputable Felix but of the effect his void has left on each woman’s life.

Bambi, a stone cold beauty, was not prepared to live life other than as someone’s pampered princess, and yet, she has, eking out a living at a dress shop, putting her children though school and getting them Bat Mitvah-ed, and seemingly subsisting on barely any income as Felix seems not to have made provision for her.

The girls miss their father and resent the mistress who was left a coffee shop free and clear and who went on to greater success.  The most interesting aspect of the entire book to me were the sisters.  Two are older, a “team”, and the baby, Michelle, is a spoiled, narcissistic beauty.  The oldest sister, Linda, is the practical one, who takes her family and religion seriously; the next daughter, Rachel, is the caretaker of the family; and both sisters are in equal parts obsessed by and worried over Michelle, who seems to sail through life, as her mother did, by virtue of her beauty.  None of them ever want to depend on a man the way their mother did, and still does, as she relies heavily on Felix’s lawyer for advice and financial handouts,.

The inner secrets at the heart of the novel lie coiled between the lines of the story and within the depths of the characters Lippman so vividly portrays, leaving behind not only a portrait of a family but of a certain swath of life in a certain part of Baltimore, from mid-century onward. Bambi’s expectations as a young woman are not her daughters’, and you wonder what the expectations of the girls’ children will be, and how they too will differ from their mothers.  While there’s a crime at the heart of the story – the real story lies in the relationships Lippman seems able to portray almost effortlessly.  This is another memorable and compelling read from one of the truly great contemporary American writers.