The return of Ghanaian detective Darko Dawson is a very welcome one.  I enjoyed Quartey’s first two novels in the series very much and I’m grateful to Soho Press for giving him a new home.  Quartey, born in Ghana to an American and a Ghanian, has ended up in L.A. but his heart remains in Ghana and it’s on his sleeve as he relates the adventures of Detective Darko. 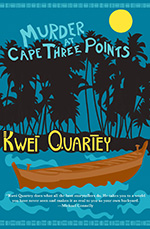 Darko is happily married and has a son with a heart condition – in the first two books his condition was worsening, and the Dawsons had no way to pay for surgery.  That problem has been overcome as the book opens with little Hosiah recovering well with his anxious parents looking on.  That’s a relief for all (including this reader) but Darko is called away from his son’s bedside before his leave is up to attend to a case in another city.

Darko is CID in Accra, the capital, and a citizen in nearby Takoradi has petitioned for the now months old murder of her beloved aunt and uncle to be re-examined by a higher up in the police department.  Darko is the man.  It’s a heartbreaking case: the Smith-Aidoos, by all accounts a well liked and respected couple, were found murdered in a canoe, Mr. Smith-Aidoo missing his head.  The petitioner, the Smith-Aidoos niece, is a physician and credits them with her upbringing and education.

The case is complex and seems to have several possible resolutions – one is connected to big oil in Cape Three Points, and one is a tangle of family hurts, resentments and long ago curses.  Darko and his able assistant pursue the oil course which gives Quartey a chance to illustrate a slice of Ghanian economics from the very top to almost the very bottom.  The key is where the Smith-Aidoos, a connected couple politically and every other way, fit into the social and economic strata.

There’s also an undercurrent of juju or witchcraft – something Darko can’t quite discount as the death of Mr. Smith-Aidoo in particular was so brutal.  Quartey’s ability to portray almost an entire culture is top notch, as is his hand with character and place.  He can really take a setting and place you into it.  One of the strongest scenes finds Darko taking a class on how to escape a helicopter that crash lands into the ocean.  You won’t forget it anytime soon.

Darko himself is a wonderful character.  He has some weaknesses – a fondness for weed and beautiful women – but he’s a good husband and father and he loves his family.  He also has a remarkable condition called Synesthesia, where he can hear a voice and if the person is lying, it causes an actual physical sensation in Darko (a useful attribute for a detective).  Darko is very much in the Holmes model as he uses deduction and careful reasoning to solve his cases, and not a clue is left out.  You yourself may miss Quartey’s sleight of hand as you read.  This was a favorite new series of mine when the earlier books were published, and I’m delighted to see the series return, as Quartey has an original and authentic voice, and his character of Darko Dawson is a real classic.  Check him out: you’ll be charmed.