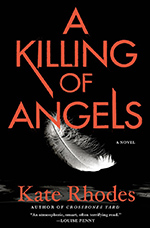 Kate Rhodes joins a new crop of British writers featuring feisty young female heroines – either police themselves or police consultants.  I’d compare her books to those by authors like Jane Casey and S.J. Bolton, both of whom highlight young female cops as their central characters.  Rhodes writes about a psychologist who consults for the police.  Both her first novel, Crossbones Yard, and this one, A Killing of Angels, are about serial killer cases.

Rhodes’ detective is one Alice Quentin who has a troubled backstory and family but whose police cases take her into a whole other dark realm, as she profiles “serials” for the cops.  All three women write about the tricky maneuvering women have to do to function in the very male atmosphere of a police station.  It’s feminism 2.0.  These women are accomplished and willing to figure out how to function within the system but often at the cost, at the suggestion of these authors at least, of a functional personal life.

Alice is asked to consult when the body of a murdered banker who has been pushed under a train turns out to have a picture of an angel in his pocket, as well as being scattered with a few white feathers.  The dead man worked for a big London private bank, the Angel bank.  When another Angel banker turns up dead with similar markers Alice’s profiling is ratcheted up and she gets drawn into the highly moneyed world of the bankers as she meets and begins to date a former Angel banker herself.  It gives her some insight into the culture surrounding the bank.  Alice’s “friend” became disenchanted with the consumer, cutthroat culture where so much money was spent on frivolities.  He’s now a charity fundraiser – with dynamite connections.

Rhodes has a very good and interesting central concept.  She keeps the violence more minimal – the first one was a tad over the top – and, unusually, targets male victims rather than females. Alice herself is so fraught with anxiety and resistance to intimacy that she’s sometimes very frustrating, but it makes her both memorable and, I think, believable.  I do think Rhodes’ focus isn’t quite a razor sharp as someone like Val McDermid, and she also puts her heroine into some silly don’t-go-into-that dark-room-alone situations.  She has all the skills to be really good, and they haven’t quite completely gelled.  However, this is a compelling and gripping read, and if you enjoy British police procedurals at all I’d recommend this one highly.  This is a new writer to watch.