I think I’ve mentioned this before, but for about the price (or less) of a movie ticket you can instead buy and read this blast of a book.  This is a series I look forward to without fail, and I’m joined by Hyzy’s growing number of enthusiastic readers, who love White House Executive Chef Ollie Parras.  Hyzy actually writes what I would call old fashioned adventure novels – she tells a rollicking good story, sometimes stretching credulity, but as you’re caught up in her narrative, you simply won’t care. 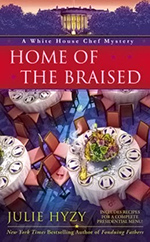 In this outing Ollie is preparing for a last minute State Dinner (something that usually takes months of preparation), dealing with snarky fellow chef, Victor, who prepares the meals for the first family and who makes the entire kitchen staff miserable, as well as trying to figure out when she’ll marry her fiancé, secret service agent Gav.  She and Gav have applied for the license but have discovered they must wait eight weeks for an officiant.  (This is the credulity-stretching part – they work in the White House, and must have a little pull).

Meanwhile an old buddy of Gav’s turns up who happens to be a minister and he offers to marry them if Gav will do him a favor.  Heading to his friend’s church to find out what the favor is, Ollie and Gav instead find the man dead along with several others, and she and Gav are intercepted and separated by the Secret Service (Gav is on medical leave) to be debriefed.  This complicates matters some at the White House as the staff prepares for the dinner and they welcome a new head usher, Ollie’s old nemesis, Peter Sergeant.  Thanks to events in the last book they are now allies.

One of the strengths of Hyzy’s novels is her clear story-telling style as she weaves the many threads of her story together, and the way she truly makes you care about her characters.  I was as invested in the personal troubles of Ollie and Gav as I was in the greater world troubles of the President and the White House.

She also infuses the books with really fun detail about the White House kitchen and how it’s run as well as the general operations of the entire house behind the scenes.  It never ceases to fascinate.  As always, she includes recipes at the end, this time notated as dishes served at various inaugural luncheons through the years.  As the slam bang story winds up with a satisfying little twist, you be wiping away a tear as well as looking forward to the next installment.  More, please, Ms. Hyzy!