It’s been awhile since I’ve checked in with Charles Todd’s Ian Rutledge – he hasn’t changed much, though Hamish, the voice inside his head, has retreated a bit.  He’s still a thorough and careful detective.  Todd is great at set-ups, and this book has a really good one:  a man is shot and killed by a sniper on the way into a wedding.  In 1920. There’s apparently no rhyme or reason to it though the book opens with a prologue at a funeral where someone is full of flat out hatred for the dead man.  The mother and son behind Charles Todd are far too clever to give away who that might be, however. 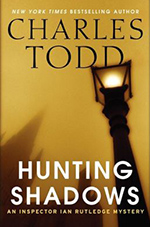 When another sniper death occurs, this time of a small-time politician in a local square making a speech, Rutledge is called in from Scotland Yard.  As the title suggests, the killer is smart and has virtually disappeared.  No one saw him or even has any idea how the two men were connected in life, much less in death.  A brilliant opening sequence sees Rutledge arriving in fen country where the deaths occurred just as a blinding fog falls over the landscape.  The fens are a dangerous place to be walking around in in the dark – they’re full of unexpected dangerous holes – and when a shadow appears out of the darkness and leads Rutledge to a nearby house and safety it seems like a providential miracle.  But the helpful stranger is just as much a shadow as the killer.

The whole story seems wreathed in atmospheric misdirection, wrong assumptions, and impenetrable questions that seem to have no answer.  This is a very skillfully told tale, and though it gets a bit meander-y in the middle, when you get to the end of the story, patience is definitely rewarded as Todd delivers a rousing and fascinating solution to the crime.  Rutledge lives in the shadows a bit himself with his relentless memories of the war, and many of the men he meets have the same memories.  It’s like an almost unacknowledged fraternity of shadowy brothers.  This is a book to be savored, both for its story and for its atmosphere and characters.