No offense to Mr. Thomas, but it’s sometimes hard to believe that he is a male writer, so completely does he embrace his female protagonist and get inside her skin, while at the same time illustrating through action the variety of obstacles that faced a woman in 1640’s York.  It helps that his Bridget is a midwife, the most female of professions.  It’s not questioned when Bridget goes to all parts of the city, or that she has enough familiarity with the human body to serve as an advisor in the case of a murder.  She has some high up connections as well, making her, for a mystery character, perfectly placed. 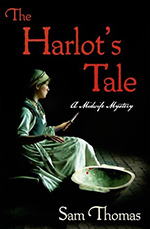 Set during the English Civil War, the City of York has been overtaken by the Puritans, who preach loudly everywhere and try and enforce their brand of morality on the populace, insisting that a heat wave is the fault of the city’s sinners.  They are inflexible and judgmental and this causes all kinds of problems, but most graphically it seems to relate to a series of murders of prostitutes who die with bible verses clutched in their hands.  Bridget and her deputy Martha are asked to examine the bodies, and they begin an investigation on their own as its certain prostitutes will talk more freely to Bridget (who has delivered some of their children) than to Joseph, Bridget’s nephew, a constable and one of the “godly”.

Thomas has also made Bridget a believable 1640’s woman.  While she’s certainly fierce and intelligent as well as living comfortably on her own (after a double widowhood and the loss of her children), she also prays and hews to some of the ideas that we today would find unthinkable, such as beating a prostitute after giving birth to punish them for not giving up the name of the father of the child.  Bridget however is operating close to the ground and has compassion and understanding for how a woman can fall into the life and how it can be repeated generationally.

Thomas is also quite good at setting up different moral quandaries and questions – the behavior of Bridget’s deputy is not always within the law, but it often feels right.  Martha, not religious, seldom feels any qualms; Bridget, sometimes realizing what Martha has done, doesn’t rest as easily.  He truly gets the reader to think about not just the bloody story he is relating but the point of view of the characters in 1640.  There’s an especially interesting and uneasy alliance in this novel between Bridget and one of the better known Madams who also owns a good deal of property in York.

This is a brisk and well told story.  Thomas manages to take a more or less contemporary suspense/thriller narrative style and infuse it with his setting and characters from another time period.  It makes for a pretty irresistible read.