Michael Gruber is one of the more original of all mystery writers,  His wonderful brain takes the reader to all kinds of places, almost always an unexpected one.  The Return is no different, following book editor Marder after a diagnosis of fatal cancer.  Marder decides to spend his last days in Mexico, returning to the tiny birthplace of his beloved and now dead wife. 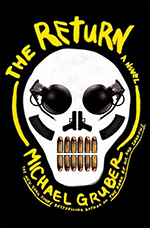 He doesn’t want to burden anyone with his illness, so he cashes out (he has a large stash, despite his profession as an editor), buys a house in Playa Diamente, Mexico, severs ties and heads out in a camper.  Unbidden, a (scary) old buddy of his, Paul Skelly, turns up and refuses to be shaken no matter what.

As the two men arrive in Playa Diamente and scope out Marder’s new house – beautiful, and complete with servants – it has a few less desirable traits, like squatters and a drug cartel that wants his land.

Gruber skillfully ties the story in the present – an increasingly violent and desperate one, where almost no one can be trusted – to his desperate and violent days in Vietnam on the Ho Chi Minh trail, where almost no one can be trusted.  It was in Vietnam the young Marder encountered the more seasoned and dangerous Skelly.  A lifelong bond based on mutual respect and extreme loyalty was formed in the jungles of Vietnam, and it’s now been transferred to the jungles of Mexico.

As the story unfolds – one where Marder establishes a little village for the squatters on his property while fending off the increasingly violent attacks of the drug lords – the story of his past with his wife is teased out.  He’s estranged from his son but his daughter becomes curious and tracks him down.  Gruber is no slouch when it comes to writing a kick-ass woman character, and Marder’s daughter, a scientist with a curious mind, is no exception.

All of the side bars in the story taken by Gruber as he unfurls his narrative are fascinating ones, and, as in all Gruber novels, you’re treated to the author’s often profound thoughts on various topics.  In this one, the central topic is death, but there are thoughts on marriage, love, parenthood, children, friendship, loyalty, war and becoming a man and what that means to someone who is looking backward.

While Gruber is frequently thoughtful and thought provoking, he’s also a great thriller writer, and this novel has all the tension and excitement that any suspense fan could desire.  The fact that as a reader you’re getting a little more mental bang for your buck is icing on the cake.  Sit back and enjoy the ride.