I can’t think of a more delicious way to allocate your book buying budget than to buy a Tasha Alexander novel.  Alexander, who began this Victorian series with her central character of Lady Emily falling in love with her recently dead husband after the fact, has only continued to spice up her characters.  Lady Emily’s love of all things Greek and the scholarly attributes that come with her passion make her a believable investigative partner for her husband, Colin Hargreaves, who works undercover for the crown. 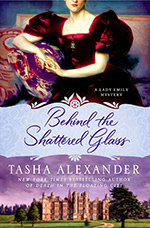 I can say there aren’t too many nicer marriages contained within the pages of mystery novels than the one portrayed here between Emily and Colin, who are now parents of twin boys.  Somehow their loving relationship is never cloying – but it is sweet.  It’s one of the very enjoyable things about these novels.

Alexander’s storytelling skills have continued to ramp up as well.  In Death in the Floating City, her narrative bounced between the Renaissance and the (Victorian) present day, to excellent effect.  In this novel she’s gone the Upstairs Downstairs route in Emily and Colin’s home of Anglemore.  I enjoyed reading about Emily and Colin at home, and I liked the added fillip that the change between the point of view of the masters and the servants brought to the story.  As the book opens a dead Marquess literally falls into the library of Anglemore, putting Emily and Colin right in the thick of things.

Alexander’s storytelling sophistication is on display as she peels away the layers of the dead Marquess’ personality while also vividly portraying Lady Emily’s neighbors, from the Marquess’ sister to the vicar’s daughter.  As always, Lady Emily’s mother brings a touch of comic relief and a scene between her and the vicar’s daughter is both hilarious and advances the story at the same time.

I really, really enjoyed the portrayal of the below stairs intrigue, especially the character of the parlor maid, Lily, who has caught the eye of Lord Flyte, a close friend of the Hargreaves who is staying with them.  I also loved the portrayal of the heir to the Marquess’ estate who shows up from exploring the Americas, “Red Indian” valet in tow. These things could all be shallow caricatures, and in the hand of a lesser writer, they might have been.  In Alexander’s hands, the deft narrative and wonderful characters spring to life on the page.  I could not put this installment down – it’s one of my favorites in a wildly enjoyable series.