Lyndsay Faye is one of the more original, beautiful, bold and interesting new voices in mystery fiction.  Her novels are set in 1840s New York City when the police department was just being formed – and she’s being compared, inevitably, to Caleb Carr.  I think a more apt comparison would be to the historical novels of Hilary Mantel, who, like Faye, employs beautiful prose, tells a cracking good story, and drenches the reader in atmosphere and character development. 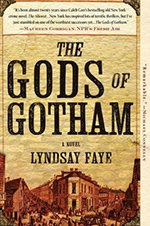 Her hero, Timothy Wilde, is a reluctant member of the brand new police force, who were given Copper Stars to wear (hence the term “Copper”).  As the book opens, Tim is a bartender, with savings, an apartment, and an eye on one Mercy Underhill.  In a second, his fortunes change, as his workplace and his apartment – complete with his savings, all in silver coin – are wiped out, and Tim wakes up in his brother Val’s apartment to also discover that a large part of his face has been burned.  He feels he has nothing now to offer Mercy and keeps away from her in shame.

Unexpectedly, Tim turns out to have a flair for detection, and it comes in handy when a small girl, covered in blood, literally runs into him.  He takes her to his new lodgings over a bakery, and he and his landlady, a new widow named Mrs. Boehm, take the little girl, whose name is Bird, under their protective custody.   Bird’s story is a sad but unfortunately common one – she’s been a child prostitute, though it takes Tim quite a while to earn her trust and get the full story out of her, which emerges in bits and pieces.

Meanwhile, the grotesquely butchered body of another child is discovered, and as Tim investigates, it becomes clear that there is probably more than one victim.

This novel is far from the typical hoary old serial killer novel.  It’s steeped in the roiling violence and bawdiness of 1840s New York, where the Irish were detested by the so-called “Nativists,” as they appeared on our shores by the thousands.  The complex political issues that guide the nascent police force are strongly determined by the desires of the powerful Democratic party, of which Tim’s brother is a prominent member.

The investigation takes Tim all over his area of the city, which includes the notorious Five Points, and includes all kinds of violence aimed at anyone not a “Native.”  Faye’s language is steeped in the time as well as she uses the “flash” dialect of the streets (there’s a glossary in the front for all of us who don’t know the other meaning of a dead rabbit).  Meanwhile Tim’s relationship with Bird, his brother, Mrs. Boehm, and the elusive Mercy Underhill – who ministers to the children being taken and so can identify some of them – transform and change throughout the novel.

This is a long novel that earns its length.  It’s rich in prose, in setting, in story, and in character.  I actually read the second novel, Seven for a Secret, first and can now see how Faye deepens the characters in the second novel and expands upon them.  The second book has a more original plot (about the Underground Railroad) but this is a spectacular first book in a series.  I read it slowly to savor the prose, and also because some of the descriptions and events are so bruising I needed time to think about them.  I can’t recommend this book, or the next one, highly enough.