I think what makes some series writers special – or one of the things, at least – is the ability to treat each installment differently.  The characters belong to the arc, but each story is told in a specific and different way that almost makes each novel a standalone.  Julia Spencer-Fleming has this skill, and she proves herself to be spectacularly versatile in her seventh novel, delivering a pure thriller. 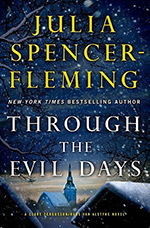 In each novel her setting of Miller’s Kill, New York, is a character in some sense.  In this novel it’s an aggressive character in the form of a horrible ice storm that never seems to end.  It makes you shiver and hope February, when it arrives, isn’t this terrible.

There’s also a story along with the weather, of course.  We join Episcopal Priest Clare and Police Chief Russ in the first couple months of their marriage, Clare newly pregnant, and Russ not so sure how he feels about it.  He’s in his early 50s as opposed to Clare’s middle 30s and had visualized grandchildren rather than children of his own at this stage in his life.

This, of course, is a great way for Spencer-Fleming to maintain the tension that made her first several novels so memorable, where Clare was a single priest and Russ a married police chief.  Any devotee of this series knows what’s happened since In the Bleak Midwinter, and Spencer-Fleming has neatly avoided the common trap of losing all tension and interest after the main characters marry.  “The course of true love never did run smooth” might be an apt description of their relationship.

Along with Clare and Russ’ story is the story of a missing little girl, an 8-year-old who is not only missing but who has had a recent kidney transplant and will die without her medication.  That gives the story a built-in drive as the tiny Miller’s Kill police force bands together to try and find her.  Clare and Russ are on their honeymoon and because of the weather, unreachable, further complicating matters.

The little girl was being fostered by a couple whose house has burned down, and her mother, a meth addict, can’t be found.  The ties to the meth culture are deep and frightening, and it’s a further complication as the cops – mainly Hadley Knox and Kevin Flynn, furiously avoiding an obvious attraction to each other – try desperately to find her.

Spencer-Fleming keeps her thriller fresh with the depth of her characterizations, from Hadley and Kevin to one of the meth heads to everyone else in between.  The ties that break your heart and the ties that bind the characters together make this novel sparkle.  The ending has both good and bad resolutions, as well as some obvious threads for the next novel to pick up on.  That can’t come soon enough for me, though I hope the next one happens in the springtime.