In A Wrinkle in Time, Madeleine L’Engel writes of “the educated heart,” a quality Ellen Hart possesses in spades.  Hart’s novels, populated with a variety of overlapping characters and a variety of life experiences, form a rich and complex tapestry where she can spin her tales.  She’s also one of the best “traditional” mystery writers at work at the moment, utilizing the format of the detective story, with clues, characters, red herrings, suspects and a driving narrative style that propels the reader forward.  To me this combination of her matrix of character and setting along with her use of the classic mystery format is an irresistible one. 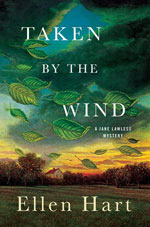 In this, her twenty-first Jane Lawless novel, Hart has lost none of her deft touch.  Jane, a Minneapolis restaurant owner with a complicated love life, is always the sensible center of any storm that might rage around her.  She’s at last gotten the private eye license that her long time friend A.J. Nolan has urged her to obtain; the wrinkle being that Nolan is now in a wheelchair and needs to be coaxed back into the world himself.   He’s a second father figure for Jane, and she’s been instrumental in his recovery process.

Jane is asked by a friend to help out when his son and his best friend (and cousin) disappear.  The families of the boys back in Winfield, Minnesota, are of course in a panic.  Andrew and Eric, Jane’s friends, are the parents of Jack; Suzanne and Branch are the parents of Gabriel.  Both boys are twelve, at the cusp of teenagehood and starting to exhibit the signs of withdrawal and separation that children of that age exhibit.

No one is sure if the boys have run away – Jack has run away before – or abducted, and the parents, with increasing panic, give the boys twenty four hours before they call the police.  Unsatisfied with the police response, they ask Jane to help locate them.  It’s her first official case as a P.I., and she needs Nolan’s help more than ever, but as he’s laid up back in the Cities, she instead takes her sidekick Cordelia Thorne with her as she heads out to Winfield.

Long time readers of the series know Cordelia is the flamboyant attention seeker to the calmer Jane, but they balance each other out.  Each usually has a personal issue on the table – for Cordelia, her issue is that her detested (and famous) sister Octavia is back in town; for Jane it’s figuring out if her new girlfriend, Avi, is the real deal.  But in this novel, these are side issues, as the clock keeps ticking with the boys still missing.

As the parents and Jane try and negotiate the tricky and emotional path of finding the missing boys, the pieces of their lives begin to slot into place, as do the lives of many other residents of the town of Winfield.  A harsh look at increasingly intolerant attitudes at the church where Suzanne is a pastor and the far reaching effects of the long recession, this adds a contemporary stamp to the book, making it not just a fun read but a relevant one.

Somewhat like her wonderful creation of Jane Lawless, Ellen Hart works quietly away in St. Paul, producing book after wonderful book.  If you enjoy traditional mysteries at all she’s really not an author you should miss.  The modern slant here is that the missing boys aren’t just a puzzle to be solved, you’re also seeing and feeling the real anguish of the involved adults as they try and resolve the situation.  With the educated heart of Jane Lawless at the center of the proceedings, this is a very worthwhile journey.