Reviewing several contemporary cozies at the same time led me back to the original “cozy” writer, Agatha herself, whose novels and characters have proved an inspiration for generations of writers to follow.  This one, published in 1933, is an especially crisp and clever stand alone, a pleasure to read as well as delivering a memorable story. It opens with young Robert “Bobby” Jones coming across a man who has fallen over a cliff – (or has he?) – and he sits with the man while his companion goes for help.  He’s with the unknown man as he takes his last breath, and as he utters his final phrase, “Why didn’t they ask Evans?”  Bobby feels he’s done his duty after testifying at the inquest, though he’s unsettled by the sister and brother who turn up to identify the man’s body.  They feel “off” to him. 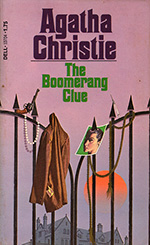 Complicating matters is Lady Frances “Frankie” Derwent; Bobby is the son of the vicar, and Lady Frances is wealthy and titled; Bobby’s sure there’s no chance for their future as they are on such unequal footing.  But they’ve known each other since they were children and there’s a certain level of comfort and understanding between them.

It was at this point that I started to wonder what make Christie’s novels different from contemporary cozies.  One commonality is her use of middle-aged or older characters as her detectives.  That’s a decidedly contemporary approach – many mystery writers of today don’t choose a younger person as their narrator or main character.  People who solve mysteries have been around and have some understanding of human beings and some life experience.

There are some differences, too.  Christie was pretty unconcerned with aftermath – a crime is committed and then the rest of the novel is the unraveling of the puzzle pieces needed to arrive at a solution.  If two characters meet romantically, they are often young people, like Bobby and Frankie in this novel, who are just getting together.  She’s absolutely brilliant at point of view from the perspective of clues.  She can take a seemingly baffling clue like “Why didn’t they ask Evans?”, which seems meaningless and impossible to understand, and then with a quick flick of the switch, she can turn her clue in another direction so it suddenly makes perfect sense.  She also is able to use people in the same way; a character perceived one way, when looked at from a different perspective, is entirely different from your first impression.  I guess that’s what people mean when they say Agatha Christie “tricks” you, but in truth, she’s so far ahead of the reader that it’s not a trick, it’s just her way of readjusting the landscape.

In contemporary cozies, it’s the aftermath that’s important.  All of them deal with what people who were close to the victim may have felt, and how they’ve dealt with what’s happening.  If someone dreadful is killed off, that’s one thing, but in other cases there are family members to consider.  The deaths often affect the detectives as well.  In a Christie novel, while death is not taken lightly, it’s viewed as a moral wrong that needs to be set right.  There’s not the up close and personal look that today’s writers take.

There’s also the matter of romance.  Many of today’s cozy writers have characters who form long term relationships that take many books to become permanent.  Denise Swanson took fifteen books to get Skye and Wally together; and I’m not sure how many Elaine Viets took to get Helen and Phil together, but it was quite a few.  Miss Marple and Hercule Poirot have no such complications; and Tommy and Tuppence are presented as a unit from the beginning.

Times change, and books change along with them.  I’m not sure how successful a straight up puzzle mystery would be today – as readers, we’ve come to enjoy our involvement in the characters’ lives; and we know there are messy consequences to murder.  Agatha’s stories are still a breath of crisp fresh air, however – her intelligent mind behind the scenes is always welcome.  Vive la difference.