Despite the fact that it’s a few days before Christmas, and the snow is deep on the ground, things are pretty hot in Tamarack County. The book seems to take its temperature from series protagonist Cork O’Connor’s son Stephen, who is burning with teenage lust for his new girlfriend Marlee, even though their gropes toward fulfillment are twice interrupted by macabre and possibly deadly attacks. With love interest Rainy out of town indefinitely, Cork finds himself eyeing the prettier women he encounters with appreciative, if somewhat impure, thoughts.  Even daughter Anne, the putative novitiate nun, has apparently renounced her long cherished vocation for, well, that same old thing. 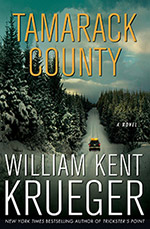 Does all this mean that William Kent Krueger, one of the finest writers around, has decided to go all Shades of Grey on us? No, far from it, because like all truly superior novelists, he provides not only the difficult but obvious stuff like plot, character, setting, suspense, style and pacing but also elevates his endeavor to the next level with an overriding theme.

What really powers this novel is L-O-V-E, in all its many and varied manifestations for good or ill, beginning with the brutal knifing of a judge’s wife that rips open the many complexities and betrayals of a long and outwardly successful marriage. The apparently pattern less crimes that follow all strike at different kinds of profound affection, like a lonely person’s bond with a treasured pet, or a father’s strong but occasionally helpless ties to a growing son. Even the despicable villain when unmasked proves to be acting from an extremely twisted idea of love.

In my opinion Kent has never received the kind of acclaim and success he deserves (especially with his recent transcendent stand-alone Ordinary Grace), but happily I have noticed more people coming into the store who have discovered his work on their own without having had it pressed into their hands by someone from Aunt Agatha’s. Tamarack County continues his impressive streak of truly outstanding Cork O’Connor novels, each one another installment in the series while at the same time maintaining a clear individual identity in plot and, yes, theme. It’s no accident that the last word of this fine book is – you guessed it – love. (Jamie)