D.E. Johnson’s fourth novel in his dark chronicle of 1912 Detroit and the frequently unlucky life of protagonist Will Anderson is also a look at the Women’s Suffrage movement.  These novels are tight and move quickly, with lots of action sequences – this has a notable section set in an actual salt mine – that keep the pages flying even if, as I do, you frequently feel squeamish about what’s happening to Will. 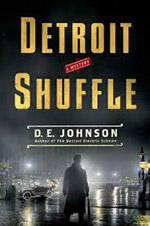 In the last novel, Detroit Breakdown, Will went undercover in the giant Eloise mental hospital where his girlfriend’s brother was a resident.  This has left him with some residual issues, and it’s left his girlfriend, Elizabeth, not only with a mother who has dementia at home but her brother Robert and his friend Francis, both of whom seem to suffer from, at the very least, some form of Asperger’s.

Will includes Robert and Francis on a few of his adventures as they have a mechanical aptitude as well as some skill in lock picking (Robert).  The main thrust of the story concerns an attempt on Elizabeth’s life at a Suffrage rally – which no-one believes, because of the radium poisoning Will suffered at Eloise.  Elizabeth loves him, but she thinks he’s still not right in the head.

As Will doggedly pursues the possible assassin of his beloved Elizabeth, he starts to unravel a conspiracy of corruption involving the upcoming election, which includes a chance to vote for Women’s Sufffrage.  He has to go to some lengths to prove this, however.

For a writer of such dark material, Johnson also writes sensitively about addiction, mental illness, and the fate of women, while writing about them not as objects or victims but as valiant fighters and equal (if not superior) players in life.  It brings a real richness and depth to his work, and it makes Will not a noir hero, but a real hero – one who is always proved to be right, despite the way things always look at the beginning of his stories.

I loved the inclusion of Robert and Francis, too.  They bring some comic relief to this complex story.  My favorite scene in the whole book has the two of them, along with Will, eating dinner at what’s called a “Self Serv” but which sounds like a cafeteria. I’m sure Johnson doesn’t want his two main characters to settle down happily ever after, but they’re lurching in that direction.  This is an interesting series and Johnson has a unique voice.  I hope there are many more installments to come.