Like Tasha Alexander’s debut (And Only to Deceive), Anna Lee Huber’s novel has a unique and memorable premise.  Young, widowed Lady Darby is staying with her sister and her husband at their castle in Scotland.  She’s recovering not from the loss of her husband, but from the slings and arrows thrown her way by disapproving members of high society.  Lady Darby was married, as the title suggests, to an anatomist, and being a skilled painter it’s thought (but not proven) that she did the drawings for his anatomy guide.  In 1830 or thereabouts, that was a scandal of the highest order.  There’s more to the story but I don’t want to give away details that Huber has been at pains to tease out throughout the story. 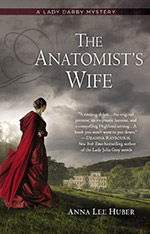 Because Lady Darby – or Kiera – is a painter, her inclination is to spend time alone and it’s not a difficult challenge for her to more or less hide out at her sister’s house.  It’s a slight inconvenience to her sister, though, who has resisted any type of entertaining in deference to Kiera.  All that has ended at the start of the novel, with a house party in full swing.

More terrible, though, is the discovery of a rather savagely murdered noblewoman inside the castle maze.  Kiera being one of the first to stumble over the body, she is accused and suspected by the rest of the house party of being the killer.  This is a classic mystery set up, of course – the main character must prove his or her innocence to the satisfaction of the rest of society.  And naturally, Kiera has her champions – primarily her sister and her husband but also the gruff Sebastian Gage, who has something of a reputation as an inquiry agent.

Asked by her brother-in-law to assist Gage with the autopsy thanks to her knowledge of anatomy, Kiera steps in and becomes a part of the investigation, despite the fact that a majority of the household suspects her of killing the unfortunate Lady Godwin.

As she and Gage become respectful friends though not technically friendly (one senses this is a relationship that will continue past the first book), Kiera is more than helpful to Gage in sorting out not just the physical details of the murder but the emotional ones.  This novel doesn’t break new ground but it’s awfully fun and enjoyable.   Kiera seems more or less of her time period, and Huber supplies interesting details about painting and how paints were prepared, among other things.  The web of characters created by the author is a good one, and Kiera’s family is one I’d be happy to meet again.

Because Kiera has been maligned and insulted she’s especially empathic, which of course makes her both a good investigator and an interesting human being.  I’m very much looking forward to the next book in the series.