“The story had something at once horrifying and sweet about it, something he had difficulty understanding.” – from Death and the Olive Grove

There are a few poets who are also mystery writers – Georges Simenon, Andrea Camilleri, Colin Cotterill, Matt Beynon Rees, Louise Penny, Karin Fossom – add to that short list Marco Vichi.  I mean poets in a spiritual sense (though Fossom is actually one).  Vichi’s blend of an almost delicate prose style with a gripping story, as well as a wider look at life, places him in that rarified company.  What makes this book special is that it’s thought provoking as well as hard to put down. 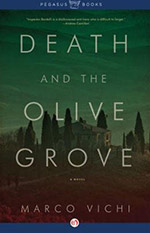 Vichi’s books are set in Florence – this is the second in a series, just now being translated.  Three are being released this year, all on different platforms.  It didn’t matter to me as I was reading this one that it was the third, as it stands nicely on its own.

His hero is one Inspector Bordelli, who tears around the Florence of 1964 in his noisy VW beetle, smoking cigarettes and scaring the life out of his assistant, a Sicilian named Piras.  I imagine Vichi set his books during this time period so he could include flashbacks to the war, at that time a not so distant memory that had affected everyone in Europe profoundly.  Bordelli is a veteran and his memories are frequently disturbing ones.

However, as readers we’re treated to the whole texture of Bordelli’s life, which includes cooking, lady friends, and a dwarf named Casimiro whose death Bordelli is trying to solve.  He’s also trying to solve a string of killings of young girls, with very little success or much in the matter of leads.  That’s the horrifying part of the story.

As Bordelli, slowly becoming an exhausted wreck, tries to come up with a lead, he encounters as old acquaintance, a Nazi hunter named Levi.  Their paths converge at a certain point, and mutual respect and a healthy hatred of Nazis on both of their parts allows them to walk the same path, however unsteadily at times.

Bordelli’s journey through space and time encompasses the war, his childhood,  Florence, and the comfortable companionship of a talented if chatty cook named Toto and a retired prostitute named Rosa.  There are thoughts on the change washing machines will bring to Italy, how tiny a speck we are in the galaxy, why he hates Nazis, cooking, love and spaghetti.  This is a delicious novel, through and through.