This is a fun mix of romance, mystery and a cracking good ghost story.  I enjoyed the fact that the author unabashedly buys into the whole ghost paradigm – there’s not an ounce of irony here, which serves to make her ghost far more scary. Set just after WWI, the main character is a young woman at Somerville College, Oxford, part of an illustrious group of women who were the first to get a university education at Oxford.  In real life their numbers included Dorothy L. Sayers and Vera Brittain, author of the classic memoir of WWI, Testament of Youth. 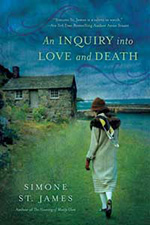 Jillian Leigh is a student at Oxford in 1924, so she would have been slightly younger than Sayers and Brittain.  While she isn’t as personally wounded by the war, she’s constantly encountering people who have been affected by it in all kinds of ways.  It’s an interesting choice on the part of the author.  Instead of immersing her character in the war, like Jacqueline Winspear’s Maisie Dobbs, Jillian’s very life fabric has been altered by the fact of it.  It’s the only world she knows, unlike Sayers, Brittain, or the fictional Maisie, for whom there was a “before” and “after.”

Jillian thus enters the world at a more cynical and jaded level (for 1924, anyway), and it seems to have made her emotionally resilient and capable, despite the large number of curve balls thrown her way, starting with the accidental death of her uncle Toby in a remote village named Rothewell.  Jillian’s parents are in Paris, so she has to leave school and identify the body and pack up her uncle’s things in his rental cottage.  She also has to drive – gasp – a motorcar.  Both things, the fact of her car and her university education make her, not to put too fine a point on it, a bit of a freak.

Her freak flag is flying her first morning in the cottage as she’s forced to greet both her uncle’s landlady and a dashing Scotland Yard inspector in only a shirtwaist dress and a man’s cardigan – with no shoes or stockings.  It’s her study outfit as she’d thought she’d be undisturbed, but she’s instead forced not only to make tea and conversation but to reveal her uncle’s secret – he was a ghost hunter, with very professional type tools.  As it turns out neither Jillian or Inspector Merriken thinks her uncle’s death was an accident or a suicide, they are sure it was murder.

This is a mystery novel, so that part really isn’t too surprising, nor is the somewhat predictable romance between Jillian and the Inspector.  What is distinct and original about this novel is the setting – a tiny village on the British coast – and the details of the local ghost, Walking John.  The story behind him is definitely creepy.

St. James also adds a little spy and suspense element to her story, allowing her to give the book the kind of slam bang finish that will stay in your mind for awhile after you finish it.  I liked Jillian and the cat that adopts her.  I liked her dashing detective, and the fact that she stands up for herself, and I liked the folklore elements that go along with ghost hunting.  This story could have been a bit tighter, but all in all a very enjoyable and unusual read.