Steve Hamilton has visited the store since his first novel, A Cold Day in Paradise, was published in 1998.  Since then he’s been loyal, kind, and funny, and he’s long been a favorite with our customers. He is our bestselling author. We love his Michigan-centric series and look forward to every novel – I was happy to have the chance to ask him a few questions. 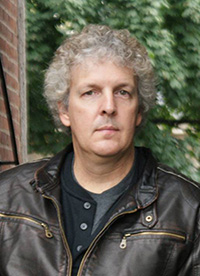 Q: One of the things I like best about your books is the way you use dialogue to tell the story.  Do you kind of think in dialogue?  Is that the way storytelling comes to you?

A: I do think dialogue is the part that comes easiest to me, yes.  In fact, I really think that I “hear” a character first, before I see him/her, if that makes any sense.  (So of course when I tried to do the biggest book yet, in The Lock Artist, it was only natural I’d have a main character who never said one word out loud.)

Q: What do you feel you’ve learned as a writer through the arc of your books?  Is there an arc you have in mind for Alex?

A: I honestly don’t know what I’ve learned, other than to maybe trust the process more, and to not worry when I have no idea where a story is going.  Along those same lines, I don’t have any kind of arc in mind for Alex.  None at all.  I barely know what he’s going to do in the next chapter!  I just keep going and I find out.

Q: Where do you think P.I. novels are heading?  I’ve read quite a few lately that are P.I. in form but the main character isn’t actually a P.I.  Alex kind of fits that model, as he’s the most reluctant P.I. ever, and technically, he isn’t one. A few recent examples would be Steve Ulfelder (mechanic) Brad Parks (journalist) and Tim O’Brien (teacher, ex-cop). What seems to stick is the white knight aspect.  What do you think about the future for private eyes in fiction?

A: It’s no secret that it’s a tough market right now.  I mean, it’s tough in general, of course, but the PI genre is especially hard hit – maybe because it’s the kind of writing that relies on a series and a slow buildup of readers, and that in turn requires a level of patience that most publishers just don’t have right now.  I’m the current president of the Private Eye Writers of America, mind you, so it’s a subject close to my heart.  But I’ve been reading the Shortcut Man series by PG Sturges, which is very recent and also very much in the classic PI tradition.  It’s good to see that it’s still possible to make it work!

Q: When you plan out a novel, how far out do you structure it?  Your books seem very meticulously assembled, if that’s the right way to put it.  Each part of the story seems to grow organically from the part before it.  For a reader, it feels effortless, but I’m sure it’s not.  What’s your method?

A: “Plan out a novel,” that’s good!  And “meticulously assembled,” that’s even better!  You’re killing me here.  Honestly, all I do is try to figure out a good way to start, something that sounds right.  Like in this most recent book, Let It Burn, it was just like, “What would happen if Alex went back to Detroit, after all of these years?”  That’s literally all I have to start with.  From there, I just keep asking myself, “What happens next?”  That’s all I can do.  I have absolutely no idea where the story is going beyond the next few pages.  I just go and hope I never get too lost.  That’s my method.

Q. Your books seem to be getting steadily darker, not that they’ve ever been a light read.  Any thoughts on that?  Maybe it’s a natural progression?

A:I think it might be a natural progression, yes.  Part of that is just growing a little older, seeing a little bit more in the real world.  It all comes out in the writing, even if it’s not that obvious or recognizable.  The first book I did after 9/11 was Blood Is the Sky, and I can still look back and see that in the book itself.  Not so much the events, of course, but the feeling I had when I was writing it.  (And maybe even a few half-hidden references, if you look hard enough.  Like the hornets and the moose and the bats and the bears.)

Q: When you started writing, did you think “I’m going to be a mystery writer”?  Or was this the format that came most naturally to you?

A: When I was eight years old, I thought I’d be a mystery writer someday, yes.  Maybe I strayed from that original idea along the way, like around college, and thought I’d “outgrown” it and needed to write something else.  But funny how you always come back to that first love.  It’s the still the one kind of story that just grabs me and won’t let go.

Q: You’ve got a large body of work now.  Do you have a favorite of all your books?  Any of them you aren’t so fond of?

A: I kinda like the second book, Winter of the Wolf Moon, because I was able to prove to myself that I could keep doing it, after that first book (A Cold Day in Paradise) did fairly well.  And I kinda like The Lock Artist, just because it was such a departure and because I had to go through so much to finally find the story.  The other standalone I did, Nightwork, is probably the least successful, just because the story didn’t have quite the right ending, looking back on it now, and because I might have let myself become a little bit too indulgent with the references to jazz musicians who 99% of readers have never even heard of.

Q: Your new book takes Alex back to Detroit.  Is this something you’ve wanted to do for a while – and you just couldn’t get him downstate?

A: Well, he made a brief trip to Detroit in the third book (The Hunting Wind), but this was the first time he had to go back and deal with his past in such a direct and prolonged way.  With everything that Detroit is going through right now, it just felt like the right time to do it.  I mean, it was rough when Alex was a cop there.  But now it’s just a lost city.

Q: I also want to ask about Vinnie.  The way you include Ojibwe culture in the books is very natural and also very effective.  How did you learn about it?  Are there folks you ask when you’re not sure if you’ve got it right?

A: I go up there at least once a year, and yes, I definitely run things by some of the tribal members, to make sure I’m being accurate and respectful.  I always try to remind people that I’m telling these stories from Alex’s point of view.  He’s close to Vinnie and he sees what’s going on up there, but at the end of the day he’s not part of that life.  He’s an outsider, just as much as I am.

Q: And what’s next?  Another stand-alone or another Alex book?

A: I might do something new and different again, but I’m certainly not done with Alex.  I can’t imagine ever not wanting to know what he’s up to next!