When is a P.I. not a P.I.?  Today’s rash of younger male writers are taking a look at that question, and they all have a different answer.  Tim O’Brien has a teacher; Brad Parks, a reporter.  Steve Ulfelder has an auto mechanic AA member whose main motive is revenge.  Really, though, the motives of the P.I. haven’t changed:  to a man, the new P.I.s  are interested in putting things right simply because it’s the right thing to do.  It looks like what’s surviving from the long standing P.I. trope is not the private eye aspect itself, but the white knight aspect.  That’s something I can get behind. 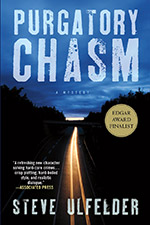 Ulfelder’s Conway Sax is definitely one of the new breed of detective.  Ulfelder’s real life race car and mechanic experience is integrated very nicely into this novel, as is the AA aspect.  I’m not sure the AA aspect is as real as the car stuff, but it feels real. Conway’s AA group calls itself the “Barnburners” and they don’t take affronts to their tight circle lightly, so when one Tander Phigg, a fellow Barnburner, approaches Conway about money owed to him by a sketchy car restoration place, Conway feels he has to check it out even though he’s not all that fond of Tander.

Of course the novel isn’t really about car restoration (though it plays a small part), it instead turns out, as all good books do, to be about the ties between families and friends and what holds them together or, more importantly, divides them.  Tander’s complicated family history emerges after he’s inevitably found dead by Conway, an apparent suicide.  Anyone who has ever read a mystery novel will know that Tander’s death is no suicide – but who is responsible turns out to be a real puzzle.

In this first novel, Ulfelder gives his main character a lot of depth by talking about his AA involvement and then introducing his family backstory and the way he got into car racing.  Lots of the detail is unique.  Though the story hews to some well established tropes, Ulfelder makes it fresh by making his character very firmly a member of the 21st century.  He’s far from an old school P.I., but I’m interested in how the new school P.I.s are going to shape.  If Ulfelder is any indication, I’m looking forward to the journey.