Bolton’s reputation and popularity has been a slow burn, but she’s catching on more and more with readers and if you like her – boy – do you like her.  Lately she’s focused on a series rather than the amazing stand alone novels which began her career (Sacrifice, Awakening), but her series is wonderful as well.  Her Lacey Flint books began with the outstanding Jack the Ripper thriller, Now You See Me, and she followed it up with the ultra creepy Dead Scared. 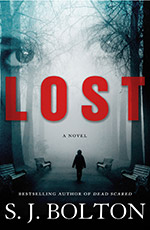 Well, she’s put Lacey through the wringer and this novel seems to be the one where she’s trying to set Lacey back to rights.  It’s certainly original to have the main series character be both so troubled and so actually physically tormented just by way of doing her job.  Lacey is part of the police force, ending up on a big case in the first novel by virtue of having a victim literally die in her arms; in the second, she’s undercover, and becomes the victim herself; in the third, she’s literally, as the title suggests, “lost.”  She’s not the only lost one here, of course, but it becomes a theme of the book.

Bolton is a true narrative genius.  She’s very good at other aspects of telling stories as well – she’s wonderful at character, she’s wonderful at setting – but it’s the way her novels fit together, suspense building from suspense in unexpected ways, that really set her books apart from the ordinary.  This novel is no different from its predecessors in its excellence.  And as usual she doesn’t shy away from any aspects of her story that might seem, shall we say, over the top.

The central story concerns a number of missing young boys who are later discovered dead.  The over the top bit is that the killer seems obsessed mainly with blood, causing a press furor marking the killer as a vampire.  This frustrates and angers the police to no end, and they willingly call in a profiler.  Bolton uses her usual deft, dark humor to mark the entrance of the profiler, who turns out to be a good member of the investigative team.

The main character turns out to be Barney, a young boy who has a little bit of OCD, is very smart, and whose Dad is mysteriously missing a few nights a week.  Barney cleans the house and follows an exact routine to stay in control of the situation.  Barney, as it happens, lives next door to Lacey and they are watching each other.

Lacey is on extended leave following the events of the previous book; she’s being watched by her police mentor and aspiring lover, Mark Joesbury.  Lacey, knowing about the missing boys, keeps a bit of an eye on Barney; Barney, on his hand, notices Joesbury keeping an eye on Lacey.

Meanwhile Barney and his buddies are intent on finding out where the dead boys – who were just their age – were found, and they start sneaking out at night to do it.  This is naturally quite dangerous and they end up finding a body themselves, which leads to all sorts of complications, primarily for Barney.  The permutations of “lost” when it comes to Barney and some of his friends are varied.  The question turns out to be, whose soul is the most lost?

Lacey is using a prison source to try and understand the mind of the person who took the boys; her help, as far as the detective in charge of the case is concerned, is unwanted, but Lacey’s a smart investigator and she’s able to think of a slant no one else had thought of.  Bolton casts her net wide, pulling in a number of believable red herrings and false leads.  She’s able to make the ultimate chase and capture extremely suspenseful as well as moving; partially because the characters she’s delineated are so strong and memorable.  Like many of Bolton’s previous characters, Barney is a wonder. I grew to love him as I was reading the book, and you probably will too.  This is another great effort from a terrifically talented writer.