Loren Estleman has written a lot of books, but many of them have been in one or another of his excellent series, so when he writes one that isn’t, it’s news. Actually The Confessions of Al Capone more resembles one of his westerns or Detroit novels than an Amos Walker effort because it’s a historical saga that uses a fictional character to portray a period of high lawlessness and great social change, seasoned with the presence of actual figures and events. 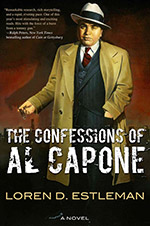 The set up is typical masterful Estleman – a low level F.B.I functionary, Peter Vasco, is one day brusquely summoned to the highest level of power, J. Edgar Hoover himself. Peter assumes he’s going to be canned, but in fact he learns that Hoover has groomed him for a long cherished ambition, to once and for all learn the secrets of Al Capone. Scarface is greatly diminished in 1944, in exile in Florida, having been paroled from his tax evasion prison rap, riddled with syphilis and waiting to die. Hoover’s plan is masterful, if manipulative, and Peter is uniquely equipped to carry it out. He’s an almost priest, having left the seminary just short of graduation, and thus equipped to travel down to Miami, masquerade as a padre and hear the addled Al’s final confessions. His entree to the tightly controlled Capone household is his own father, once a driver for Capone in Chicago and now a fishing boat owner in Fort Lauderdale. Peter’s relationship with both his father and the church for which he’s to pose as a father is conflicted, so there’s a lot of soul searching involved with his pursuit of Capone, but he’s also glad, in these war years when Al’s racketeer colleagues have turned to black market profiteering, to be able to do something to help the war effort.

Peter infiltrates the Capone household rather easily – it seems as if his family’s relationship was closer to the mob king than young Peter knew. Details of his past bob up unsettlingly as he recognizes visitors to their apartment and divulged details dovetail with his father’s old tall tales. Capone’s confessions don’t come in the confession booth, but rather at snatched moments when they are alone and the old man begins to ramble about his past. These portions of the novel are interspersed at intervals and looser than the usual crisp Estleman style. They’re not exactly The Last Words of Dutch Schultz, but their relaxed tone is appropriate, and effectively break up one of Estleman’s longest narratives. This device also allows him to move back and forth from the roaring twenties of jazz and bootleggers to the wartime forties of rationing and all consuming war effort, both eras coming vividly to life. The violence and drama of the confession balances the original story in which the tension is of a quieter sort, although Peter, in true Amos Walker style, manages, despite his collar, an impromptu sex tryst and a severely mangled face. Any reader who believes that Estleman, hamstrung by fidelity to history, will be unable to come up with a jaw dropping final twist, doesn’t know this ingenious author.

Even though Estleman, as always, has an astounding grasp of the past both in detail and larger events, The Confessions of Al Capone is more saga than history. He clearly enjoys standing many of our received notions on these events on their heads. Long before Milton’s Satan, the most casual critic knew that bad guys are more fun to read about than good guys, and even in their own time thugs like Dillinger and Capone were popularly lionized, so it’s perhaps no surprise that the gangsters in general come off better than the G-men. Estleman’s characters,even the lowliest tough guy, are always impressively and improbably eloquent, but I don’t know of many readers who would trade his wonderful dialogue for more realistic banalities. The historical characters like Hoover, the fearsome Frank “The Enforcer” Nitti and the somewhat pitiful Sonny Capone emerge as memorably as the invented ones. Mae Capone, Al’s bride, in particular stands out as a marvelous, strong, resourceful if somewhat unlikely character.

This is evidently a book that’s a labor of love for Loren, one that he’s worked on and been thinking about for a long time, and his effort translates into an enthralling experience for the reader, a journey to a long departed time that becomes as alive as today’s news. (Jamie)