When books by Erin Hart, Deborah Crombie and Elly Griffiths come out all at once it’s almost an embarrassment of riches.  To my mind, the three women have some similarities (and some differences), but enough similarities of the soul that reading three in a row, one by each, is a soul encompassing experience.  Elly Griffiths’ was the last one I picked up of the triumvirate, and it was like slipping into pages written by an old friend. 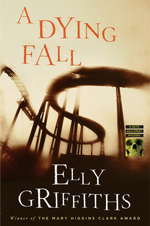 Ruth Galloway, Griffiths’ main character, remains unapologetically herself – and readers love her for it.  She’s a bit over weight, she doesn’t care about her clothes, she loves her job, and she’s passionate about her toddler, Kate.  Because Kate’s father is Nelson, a married police detective, Ruth’s life is nothing if not a complicated web of relationships.  Playing with this theme, Ruth hears first of the death of an old university friend, and then she receives a letter from him asking for her help.

The thoughts of her university days bring up all sorts of memories, and as she reviews her catalogue of friendships, few of her classmates are actually working as archeologists.  Her dead friend, Dan, was, and not only that, he thought he’d made the kind of discovery that would make anyone’s career.  He thought he’d found the bones of King Arthur.

More than intrigued, Ruth schedules her holiday to coincide with a visit to Dan’s discovery in Lancashire.  Everyone thinks she’s nuts to go north for a holiday, but she packs up Kate – and Cathbad – and heads north to check out the Pendle Forest.

Meanwhile, Ruth is getting threatening text messages telling her to lay off – something she ignores, but it adds to the suspense as she discovers the details of Dan’s death in a fire, and begins to meet his friends, a perfect snarl of academics who are nothing if not the personification of conflicting and complicated relationships.

As it happens, Nelson’s family is from the same area and he’s on a family holiday at the same time.  He’s horrified when, as he’s accompanying his wife on a garden tour, he looks out the window to see Cathbad pushing a stroller with his daughter in it. There’s an inevitable uncomfortable meeting – as all parties are aware of Kate’s parentage except for Nelson’s mother, who takes a great shine to Cathbad and invites them all over for tea.

Griffiths has a brisk, uncluttered storytelling style that zips the reader through a tricky mystery, several murders, highlights the thrill of the discovery of the possible King Arthur, and ties all her plot threads together in a very suspenseful finish.  She plays a bit of a narrative sleight of hand towards the very end of the story that’s very effective.  She always gets to your heart by the end of her stories, and this wonderful read was – happily – no different.