Deborah Crombie’s new novel explores the world of music and the limits of friendship. Set in the neighborhood of London known as the “Crystal Palace,” after the legendary and long ago burned down icon of Victorian progress, the neighborhood itself is not so legendary.  It’s instead a bit gritty, and in the past it’s home to a miserable 13 year old boy who is looking out for his alcoholic mother, learning to play the guitar, and being befriended by his next door neighbor, an “older” woman who seems exotic to him.  The woman, Nadine, often shares her dinner with him, sensing he’s hungry; it’s the first time an adult has looked out for him. 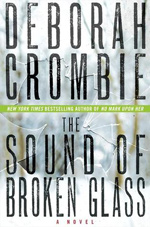 Fast forward to the future, and Gemma James is on the trail of the killer of a local barrister who is found trussed up and strangled in a seedy hotel.  Her husband Duncan is still on stay at home dad duty with their new foster daughter, Charlotte, but he’s more or less itching to get back to work.  As Crombie has gotten Gemma and Duncan happily married, she’s still brought interesting tension to their relationship by having them divide child care duties.

Meanwhile, the miserable 13 year old of the past has grown into a real musician, and his path intersects with Gemma’s investigation and with her second in command, Melody, at several points.  While I never for a minute thought the grown up Andy was involved in the crimes Gemma is investigating, he still has an uncomfortable proximity that has to be explained.

Crombie is truly excellent at several things.  One of them is creating fully realized characters who are so appealing and interesting you want to know more about them.  That’s certainly the sign of a skillful storyteller.  The other thing she’s excellent at is telling a true mystery story, with connections that aren’t clear, clues, and red herrings.

She’s also interested in exploring a theme in each novel – this one seems to be about the limits of friendship.  What happens when betrayal or even simple disappointment enters the mix?  How far do you go for your friends and family?  What ripple effects to family members have on one another?  All of these themes are being worked through as Crombie tells another mesmerizing mystery story.  She’s definitely one of the very best crime writers at work at the moment, carrying on a legacy established by the likes of Ruth Rendell, P.D. James, and Elizabeth George.  While those writers may no longer be at their peak, Crombie is.  Long may the streak continue.