This lovely book is a kind of spiritual meshing of Agatha Christie – for plot – and P.D. James, in that the setting and characters are as richly captured as any in a James novel.  The fourth in Hart’s fine Nora Gavin series, The Book of Killowen finds Nora and Cormac back in Ireland and back in another bog, this time on the trail of an ancient bog man as well as a much more recent one. 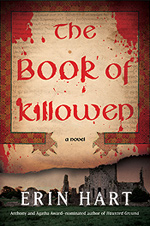 Like the bogs of Ireland that Hart chooses to write about, her stories are richly layered creations, right down to two, not one, bodies found on top of one another in the trunk of a car dug up by a peat scavenger at the beginning of the book.  As the threads of Hart’s story begin to coalesce, we meet the victim, Benedict Kavanaugh, a TV host who delighted in humiliating his guests, and his wife, one Mairead Broome, who connects the story back to an Artist’s colony in Killowen.

The artists’ colony in Killowen appears to be full of misfits on the run from life for one reason or another, but who have made the colony a living, breathing place where there are cheese makers, calligraphers and other types of artists, as well as Claire, who has made the place a haven. She’s the original colony “settler”, who seems to have a mysterious hidden past of her own.

The peace of the colony is disturbed by the greedy and crass Vincent Claffey, hated by one and all, not least because of his brutal treatment of his young daughter, who happens to have an infant.  The colony, which is also a guest house, is joined by Nora and Cormac, called in by the National Museum to examine and preserve the bog man.

Nora and Cormac bring with them Cormac’s father who, recently suffering a stroke, needs a full time minder as he can no longer speak legibly. Hart is expert at portraying the heart ache of the couple who must care for an aging parent while at the same time attempting to function normally otherwise. She puts it beautifully: “The stroke had picked them up and landed them in a place where nothing was familiar, but Cormac knew it was the only place he wanted to live.”

Meanwhile, there’s a real sense of discovery and scholarship as Nora and Cormac examine the ancient bog man and some of his belongings.  There’s a long lost artifact, similar to The Book of Kells, the Book of Killowen, that seems it might be connected to their bog man.  So threaded in with this mystery is a real joy in scholarship – though the dark and competitive side of it is also illustrated, the joy comes out on top in the end.

This is a story that has many aspects – it has history, as Nora and Cormac discover more and more about the ancient artifacts they do uncover; it has a tricky mystery, complicated enough to please Agatha Christie herself; and it has a real emotion and sense of place that is all Hart’s own.  I’m not sure why there aren’t a ton of mysteries set in poetic, historic Ireland, where the legacy of literature and words is a famously rich one, but I’m glad Hart’s are set here.  This is one of the very best traditional mystery series being written at the moment.