In 2010 Brad Parks won the Shamus award for first P.I. Novel for Faces of the Gone. It’s a really good book, deserving of all sorts of accolades, but the interesting thing is that Parks’s protagonist isn’t a private investigator, he’s an investigative journalist. I’ll take this as evidence that the traditional P.I. novel ain’t what it used to be – as James Crumley said, no fault divorce really took the wind out of the sails of the profession, which was never really the way it was portrayed in books anyway. A few masterful old masters keep writing in the traditional vein, but these days most private eyes, like Steve Hamilton’s Alex McKnight, are more often of the reluctant variety. 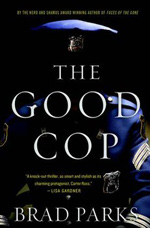 Today many of the somewhat shabby white knights who walk the mean streets of crime fiction asking dangerous questions, uncovering corrupt conspiracies, leading somewhat spontaneous love lives, and getting beat up, have slid over to other professions, like Carter Ross, the hero of the new Brad Parks book The Good Cop. If you think about it, an investigative journalist is a great whodunit protagonist, a professional motivated to ferret out the truth who possesses contacts in the judicial system, someone not hidebound by legal protocol, yet also not fully empowered or protected by it.

Parks makes the most of the possibilities in the excellent The Good Cop. The narrative starts with a cop getting killed by a gun shot. After talking to the grieving widow and family, Ross begins to work on a moving piece about a good cop and family man tragically struck down on the job. Given what he’s already learned it comes as quite a shock when word comes down that the killing is being classified as the suicide of a corrupt drunk. Neither his newspaper or the authorities seem interested in pursuing the case much further, so Carter takes it upon himself to uncover the truth.

In addition to this compelling set-up, The Good Cop has a lot going for it, including a timely plot strand about the illegal gun trade, and a fascinating look at life in the increasingly unsteady newspaper trade, but to me the best part is the character of Carter Ross himself. Ross is a prep school graduate, not exactly a natural fit with gritty Newark, New Jersey, and the witty, wise, self-deprecating voice he uses to narrate his adventures is consistently engaging.

After a lifetime of never once being handcuffed, it had now happened to me twice in one day. Suddenly I knew what it was like to be a character in Fifty Shades of Grey.

Along with the wisecracking, there’s plenty of action and suspense in The Good Cop, following the template of a good P.I. novel while still feeling fresh. It’s reassuring to know that no matter what the changes in society or the genre, the most entertaining books are still to be found in the mystery genre.  (Jamie)