Krueger has long been one of my favorite writers – and he’s a favorite of many of our customers as well, who are often annoyed when another Cork O’Connor book doesn’t appear quickly enough. From the very beginning I’ve been captivated by this writer’s prose and the depth of character he’s is able to convey.  And of course, he’s a wonderful mystery writer, good with suspense, action, and plot twists. That’s a rare enough combination that Krueger is one of the best in the contemporary mystery field. 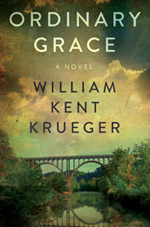 His new novel, which I was lucky enough to read in manuscript and raced through for a second time in the form of an advance reading copy, is one of his best books. Maybe the very best he’s written.  That is saying a lot, as other Krueger fans out there will realize.  This delicate, sturdy, suspenseful, sensitive and amazing story will stay with you long after you’ve finished the last page.

While it is a mystery it’s a bit different in form from the more straightforward Cork O’Connor books. Set in a small town in Minnesota in 1961, it’s told through the lens of a thirteen-year-old boy who doesn’t quite understand the world but is starting to. Frank is part of the family of the Methodist minister in town. His father is the strong, silent type; his mother is artistic, passionate and frustrated; his little brother, Jake, who shadows Frank everywhere, stutters and keeps quiet in public; and his sister, Ariel, is the beautiful family star.  Musically gifted, she’s slated to head off to Juilliard.

Taking place during one long, hot Minnesota summer, this doesn’t feel like a period piece, even though it’s set very much in 1961. It feels more like Frank’s remembered dream of childhood, one which had terrible losses during the summer he’s remembering.  Because of the way the story is told, it takes on even more of a kind of dream-like quality.  The book doesn’t have the self-consciousness that some historical novels tend to – this is a story that happened in 1961, no other way to tell it.

The story, which is simple, yet complex underneath in many ways, concerns Frank’s family and, as he foreshadows early on ­three deaths that held the town and Frank’s family captive during that summer.  Because Krueger has structured the book so that the central death occurs in almost the exact middle of the story, it’s very much a “before” and “after” book. Like the rest of the book, the structure seems simple, but the underlying psychological parts of it are very complex.

Krueger has a wonderfully clear-eyed way of explicating relationships and human beings and making them feel understandable and relatable. These are people you understand – even know, but at the same time they are very specific people who live in a very specific time and place.  That’s the mark of a master storyteller, in my opinion.

What makes this book memorable is that while it’s about a terrible loss, it’s also about the way people deal with terrible losses. There’s a passage toward the end of the book – you’ll know when you get to it ­- that left me sobbing as well as dog-earing the pages so I could go back and read them again.  It’s that kind of transcendent moment that, as a reader, you live to discover, and I imagine, as a writer, you live to be able to convey.

Buy a copy of this book for everyone and anyone that means anything to you.  I hate to use the word special, but this book is special. I’ve read it twice and am already looking forward to revisiting it a third time. If there are any better books written this year, or for several years to come, I’d be very surprised.