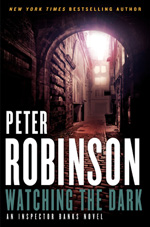 Ostensibly refreshed after last year’s standalone novel, Before the Poison, Peter Robinson returns to his much loved Inspector Banks series, slipping back into his familiar character like a comfortable old shoe. Banks has mellowed, gotten used to his divorce, resolved his love life issues for the time being, and is enjoying his red wine and his music. The case he’s called in to handle involves the death of a colleague at a police rehab center, where the unfortunate Bill Quinn had gone to recuperate.

Unfortunately Quinn is bizarrely killed by a cross bow in the woods near the facility, and he’s discovered, as you might imagine at such a place, by a fellow officer who knows to secure the crime scene and make the necessary calls immediately. As Banks and his crew begin to turn over the rocks of Quinn’s life, they find some discrepancies in what they had thought to be the life of an ordinary and decent officer, starting with some very compromising photographs Quinn had hidden away in his room.

Because Quinn was a member of the police force, an officer from Professional Standards (known on U.S. cop shows as “the Rat Squad” or Internal Affairs) is called in to shadow Banks’ investigation, much to his extreme annoyance.  He is far from gracious as the seemingly not unpleasant Joanna Passero merely tries to do her job.

As the investigation deepens and another body is discovered, the case seems to have ties to local organized crime as well as the now six-year-old disappearance of a local girl, Rachel Hewitt, who had gone abroad for a pre-wedding weekend with some of her girlfriends.  She disappeared without a trace, leaving Bill Quinn, along with others, both haunted and mystified.  This is one of those cases where the resolution appears to be stubbornly impossible, though little by little, Banks wears away at the solution, mainly through patient and painstaking police work.

This far into a series, an author is often as interested in the connections between the major characters as he or she is in the plot that’s unfolding in a particular book. Robinson, one of the most diffident of mystery writers, allows his characters their own space to work. Banks and his colleague Annie, while formerly involved, can now work easily side by side, and in this novel, they are working parallel stories in different countries.

Banks’ trail takes him to Talinn, Estonia, a frequent party spot for British and European tourists (and if you google it, it’s a gorgeous spot) where Rachel Hewitt was last seen. The connections created by Robinson ­emotional ones, painful ones, memorable ones – are the source of the book’s heart. Banks’ interest in Joanna, Annie’s in a stray Polish girl, coalesce in an ending that’s both satisfying and disturbing.  Hopefully Banks’ absence from the scene won’t be as long this time around.