This fascinating little volume, set during England’s Civil War in 1644, is surprisingly zippy. I love historical novels but I have to say “zippy” is not always the applicable word. It’s unusual also in that it’s written by a man but features a female protagonist, and not just any female, but a midwife, the most female of all professions. 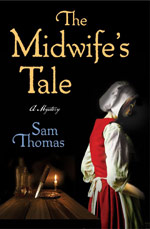 Any concerns you might have about not being very knowledgeable about Oliver Cromwell’s revolution to understand the story can be set aside – while this setting is the book’s backdrop, Thomas’ main concern is character and plot, just like any other able novelist. His central character, Bridget Hodgeson, is a wealthy and well known midwife in the city of York, a city being besieged by rebels but still in the hands of the King’s forces.

The book begins – as perhaps all books with “midwife” in the title should – with Bridget attending a birth. The laboring mother in question is one Mercy Harris. Mercy is beyond poor, and since she’s unmarried, Bridget cannot by law deliver the child until Mercy names the father. At the time, the law demanded that the father be named so that he, and not the state, would be responsible for the care of the infant. The laboring woman holds out as long as anyone could reasonably expect, but she at last gives in, and Bridget is finally able to help her.

While Mercy plays very little further part in the story, she serves to set the scene, to establish Bridget’s character and expertise, and even to delineate some of the class structures of 1644 York. It’s not a terribly forgiving atmosphere for women, something made even more clear by the following two events.

First, a servant girl named Martha turns up on Bridget’s door. She has a letter stating that she had worked for Bridget’s cousin, asking if she’ll absorb Martha into her household. Bridget does, and she begins to take Martha on birthing rounds with her. Martha quickly proves both invaluable and mysterious. Secondly, Bridget gets a call from the Lord Mayor.

One of Bridget’s friends, an Esther Cooper, has been tried and convicted (while she was sitting in a jail cell the entire time), of poisoning her husband. The sentence for this is burning at the stake. However, Esther is “pleading the belly”, i.e., saying that she is pregnant, so Bridget is called in to examine her, with explicit instructions to find her not with child, no matter the actual truth. With this set up, of course Bridget finds Esther is pregnant, and not only that, she is determined to find out the truth of who poisoned her nasty husband, Stephen Cooper.

With Martha’s help, she sets out to do so, despite many, many obstacles in her path. I mentioned that this was a “zippy” book – by that I mean there’s a brisk plot, a good deal of action as well as some fairly gory deaths, and a rich sprinkling of unsavory or power hungry or just plain nasty characters. It moves right along, and you get very caught up in Bridget’s life, Martha’s story, and the entire fabric of 1644 York.

While the short bio on the back of the book mentions that Mr. Thomas is a professor, he also seems to be a full fledged novelist, with a very real skill at setting a mood and telling a story. This is a terrific first effort with a great main character. I am already looking forward to Bridget’s next outing.