Julie Hyzy has quickly become one of the big kahunas in the cozy universe, with her delightful and sparkling Olivia Parras White House chef mysteries being more and more eagerly snapped up with each installment. She’s established herself as not only a very capable cozy writer, but she’s also quite good with suspense and plot, sometimes surprisingly good. The ending of her last Olivia novel, Affairs of Steak, had an extremely skillful action sequence – one that sits comfortably alongside anything Robert Crais or Michael Connelly might dish out. 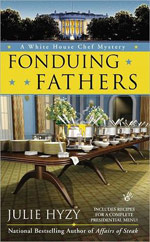 It’s the balance that’s delicious – the White House setting is almost hypnotically interesting, and the zest Hyzy brings to her storytelling only makes the whole mixture more memorable. In this novel she veers a little closer to the action side and a bit far from my beloved White House, but the kitchen and the First Family are still a big part of the story.

This story, however, mostly concerns Olivia’s personal life. It starts with a revelation from Olivia’s mother, and it sketches in the details of Olivia’s deepening relationship with Gav. Starting around her own kitchen table, rather than the one in the White House, Olivia’s mother reveals that while her father is buried in Arlington, there is some question about whether he belonged there. Olivia passionately believes in her father’s honor and that he’s resting right where he belongs, and she sets out to prove it.

All she has is a shoebox given to her by her mother and the name of the firm where her father worked after leaving the army. Gav agrees to help and they set out using their considerable resources to find out anything they can about her father’s past and his long ago death.

Along the way Ollie encounters folks that have surprising and in some cases hidden ties and allegiances to her father, Gav and herself. She’s in and out of the White House Kitchen, mainly interacting with the present and inefficient Head Usher; her one time nemesis and new ally, Peter Sergeant; as well as continuing to forge a friendship with the President’s young son, Josh. There’s a scene where several of the characters go undercover that is pretty priceless.

Six books into the series, I have enough affection and interest in Olivia to want to know her family history and her father’s background. Her mother has been enough of a presence in the books to make me invested as a reader in the outcome for her, as well. The denouement was satisfying and even moving, as is the increasing commitment between Olivia and Gav. Next outing, though, I hope Olivia is once agin back behind one the world’s most famous kitchen counters.