Jo Bannister has had a spotty publishing career stateside – she was a steady seller for us when she was published in paperback by Worldwide. She’s since been picked up by Minotaur and published exclusively in hardcover, but the cash outlay is well worth it. She’s one of the quiet secrets of mystery writing – not that well known, but incredibly talented and multi-faceted. Her closest “kin” as a writer may be Cynthia Harrod-Eagles, as she shares Harrod-Eagles’ mix of dry wit and gritty realism as well as her splendid plotting skills. 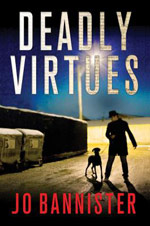 This novel, which may or may not be the first in a series, centers on the small British town of Norbold, where crime – with one big exception – has been mostly quelled, thanks to fearsome Chief Superintendent Johnny Fountain. Bannister is able to quickly introduce several plot threads, make them compelling, and then begin, slowly and carefully, to knit them together.

Along with Johnny Fountain, we meet young Jerome Cardy, an apparently blameless law student who is sure he is going to die. It’s not giving much away to say that he does. We meet the broken Gabriel Ash, nicknamed by the police “Rambles with Dogs,” as he’s known for wandering around town talking only to his dog, Patience. He encounters a brutal group of teens in the park in the opening chapters and it works out that his path crosses briefly with Jerome’s. It’s this thread that ties the book together.

As Gabriel wonders what to do with the tiny thread of information he’s been given by the doomed Jerome, at the same time, newbie Constable Hazel Best is herself wondering about the cause of Jerome’s death. She’s also worried about Gabriel, who has been beaten severely but has refused medical help. While this book is a tightly plotted thriller, it’s also the story of how the broken Gabriel and freshly minted Constable Hazel begin to test the waters of sanity, for one, and confidence and adulthood, for another.

Their friendship is a believable one, as are the ways they lurch toward both friendship and a resolution to the mystery of Jerome’s death. Bannister is such a skillful writer that each twist, while she’s laid out the clues, is an unexpected surprise. Because she’s so gifted, the plot grows organically, each thread proceeding naturally from the one before it. If you’re interested in either a good read, or a master class on how to write a compelling police thriller, look no further than the very talented Jo Bannister.