Jenny Milchman’s atmospheric debut novel would probably make you feel a chill even in August. Set in a tiny Adirondack town, main character Nora Hamilton wakes up one morning to find her whole world blown apart. She’d been happily married to a police officer – one terrible morning she finds he’s hanged himself in the attic. 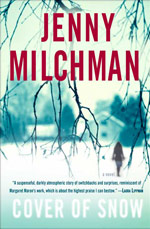 From there, it’s almost as you are with Nora on her confusing journey of grief and revelation as she tries to figure out why her apparently happy and loving husband would have done something like this. Of no help are her cold, stand-offish mother-in-law; any cop in town, most of whom tell her to stay home and get better; or her own parents, who are whisked off canvas almost immediately.

Of some help is her fierce sister, Teggie, who painfully (to Nora) is falling in love in front of her eyes. What’s helpful is Teggie’s fighting spirit, which Nora channels when she’s faced with something particularly difficult or scary. Also helpful is an apparently autistic mechanic who provides Nora with several clues, most of them very hard to figure out. He serves as the voice of the innocent, untouched by the world at large.

As a series of unexplained incidents, both past and present, begin to menacingly coalesce, as readers we’re still somewhat in the dark, which is an unusual structure for a thriller. We’re finding things out along with Nora. In many thrillers, the reader is inside the head of the bad guy on some level, or you’re given more of a bird’s eye view of the situation than the character sometimes has.

Milchman’s book is entirely from Nora’s perspective, so while you are sometimes frustrated at what she doesn’t know or can’t figure out, at the same time it’s truly a mystery. As a reader you won’t be peeling away any layers of the mystery before she does. The book’s strength lies in Milchman’s sensitive portrayal of many of the characters as well as the setting. As far as I’m concerned, I’m never going to visit the Adirondacks. They may be lovely, but they apparently harbor plenty of secrets.