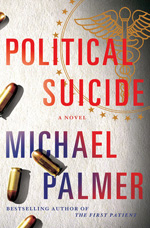 I’m immune to John Sandford and James Patterson, but I’m a sucker for Michael Palmer, a medical thriller writer whose books are a complete guilty pleasure.  Usually I get an advance copy in December, right about the time I’m fried by Christmas, and it’s just the ticket for relaxing at the end of a busy day.

Palmer has written a long string of medical “stand alones,” but it seems like he now may be tackling a series, beginning with his most recent paperback, Oath of Office. In that book he introduces Dr. Lou Welcome, an ER doc, recovering drug addict, and divorced father who also works in the Physician Wellness Office (PWO) where he mentors physicians with substance abuse issues.

This novel, after a prologue in Afghanistan, returns to Dr. Welcome in his PWO office, when, in the middle of an unpleasant conversation with his boss, he gets a distress call from an old friend who simply asks him to come quick.  Palmer never messes around (I gave one to my Dad once, who was delighted that there was action on the very first page).  This installment is no different.

This novel varies from the formula that’s worked for Palmer for many years – a dedicated physician who uncovers some kind of secret conspiracy.  Believed by no-one, the main character is doubted and hounded almost out of his/her career.  This is a fantastic formula.  I’m all for it, and I’ve read every single novel that Palmer has written so far.

I’m not against the series idea, and while this is actually an excellent and hard to put down thriller, I still missed the medical setting, which Palmer, a doctor himself, always makes authentic.  But this is a twisty and complicated story involving a secret group of special ops marines.  Lou is pulled into the story because his friend in distress, a well known DC doc, has been accused of murdering a congressman and is being held in jail.

Lou is positive his friend is innocent and works from that premise, despite hostility from his friend’s lawyer and indifference on the part of the cops, who are sure they’ve arrested the guilty party.   Lou has a lot of different connections and he calls on many of them throughout the novel, making some new ones along the way.

Like the characters in a Dick Francis novel, Palmer’s main characters are always decent, down to earth guys (or gals) who know what’s right and stick to it, even when it gets them in trouble.  Lou Welcome is no different from any of his predecessors, and he has a good backstory.  In this book he even acquires a bad tempered cat.

Palmer’s skills as a thriller writer are second to almost none.  He is a very sure handed, straight ahead story teller.  It’s hard to look up when you’re reading one of his books.  I am already looking forward to next year’s installment – I hope Dr. Welcome will find himself back in a hospital.  It will be interesting to see how Palmer handles the challenges of a series.