It’s a privilege to enter Margaret Maron’s world.  She has created Deborah Knott’s world every bit as much as J.K. Rowling created Harry Potter’s, and the texture of it is practically a living thing.  On every page, Judge Deborah Knott will be doing nothing predictable – she’ll be cooking, working, interacting with her husband or stepson or huge (and I do mean huge) extended family.  In short, she’ll be living her life, and you’re welcome to join in for the duration of the story. 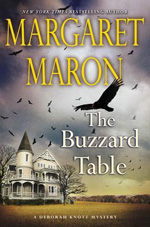 In this novel, she rotates narrators – sometimes it’s Deborah’s husband, Chief Deputy Dwight Bryant, sometimes it’s Deborah – sometimes, in this novel, she’s turned things over to her character of Sigrid Harald from her earlier (and much loved by mystery readers) series.  She brought Sigrid back in the last novel, which was set in New York (Sigrid’s home, where she works as a police detective) and in this one Sigrid is in Deborah’s neck of the woods to be with her mother, Anne, and her dying grandmother.

The main gist of the story concerns the mysterious Martin Crawford, an eccentric British cousin of Anne’s and Sigrid’s.  He’s an ornithologist and photographer who is living on a derelict family property to observe the buzzards (a.k.a. turkey vultures) in the area.  He has a big cement slab out by his place where he leaves fresh kill for the buzzards, who swoop around his property and have come to accept him, to the point of following his truck around town.

There are undercurrents to the story, starting with a horrifying prologue in Somalia, some mysterious plane take offs and landings that have attracted the (illegal) attention of a local student who turns up in Deborah’s courtroom, and as always in a Margaret Maron novel, there’s family.

The main actors in this story are Anne, Sigrid, and Mrs. Lattimore, Anne’s mother; and Deborah and her new-ish stepson Cal, who has big things on his mind.  There’s also a missing real estate agent, Becca, who is proving to be a real dead end for the police as they question everyone who knew her.

While Maron weaves in some political threads, she’s also ultimately concerned with the family ramifications to any crime, and it’s part of the reason her books are so appealing.  I was talking to a long time customer about these and we agreed that the books have a certain rhythm to them, a cadence, and as a reader you have to give yourself over to it.  It’s more of a delight to do so than anything else, however.   I was left at the end of this one (as usual) sniffing back a few tears and looking forward to the next installment.  If Sigrid, one of my favorite characters in mystery fiction, can continue to be included, all the better.