Adler-Olsen joins a long line of wildly popular (and actually wildly different from each other) Scandanavian crime writers who started with Henning Mankell and were really ramped up by the popularity of Steig Larssen.  I haven’t been a huge fan of some of the other Scandinavians (including Jo Nesbo), but I love Karin Fossum’s lovely prose and her Ruth Rendell-ish manner of telling a searing and concise story.  Adler-Olsen may prove to be a favorite for me – I couldn’t put this book down. 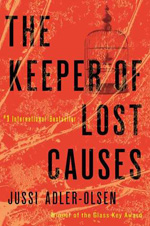 These are belatedly being translated and published in English, with two available at the moment.  This first volume was actually written in 2007, though it was available here in 2011.  Hopefully this lag time will go away as I imagine I’m not the only one enjoying these books.

The main character is the irascible and cranky Carl Morck, injured in the line of duty, and temperamentally unable to work with anyone else.  A perfect solution seems to be presented to his boss when he’s given a huge amount of funding for a cold case division, called “Department Q”.  Morck is banished to the basement of headquarters, his superiors and co-workers can breathe more easily, and he literally puts his feet up and decides to coast through his work days, playing solitaire and napping.

That’s not a novel, of course, and Adler-Olsen isn’t one to let things lie.  He’s laced his narrative with the story of the disappearance and captivity of a beautiful young politician, Merete Lynggaarde.  It becomes clear (though it’s pretty obvious) that she’s the one being held captive in a concrete room for reasons unknown to her or to the reader.

Carl’s awakening takes a bit of unexpected expectations from the assistant he demands and receives.  It turns out his new helper, Assad, is more than willing to actually assist in solving cases, and reluctant to spend his entire workday rearranging and cleaning their basement office.  As Carl begins to listen to Assad – who tries to make their workplace pleasant by serving tea, playing music, and in general cleaning up and making their office space livable – he is also reluctantly drawn to one old case among the many files in his office.  Of course, it’s the disappearance and presumed death of Merete.

Adler-Olsen, who has been a musician, a writer of books about cartoons and Groucho Marx, and who has studied medicine, sociology and film-making, brings a wide array of skill sets to the table.  He’s an excellent thriller writer, but he’s also great with character, as the pairing of Carl and Assad is delightful and can obviously nourish many books to come.  Assad’s enthusiasm contrasted with Carl’s depression and lethargy is a perfect mix.  And while many of our bookstore clientele have indicated they are weary of the “troubled detective” method of storytelling, Adler-Olsen manages to bring some zest to the whole affair.

Carl’s whole backstory – his ex-wife who won’t leave the shambles of a cottage in his backyard; the cranky adolescent stepson he’s inherited and who lives with him; his peculiar lodger who turns out to have a love for Playmobil toys; and most of all his police backstory, involving the death and injury of two of his colleagues – makes him a rich and intriguing character. Adler-Olsen is excellent at teasing out these details throughout the story, just as he ramps up the suspense by making the end of the book a will-he-get-to-her-in-time affair.  The investigation details are excellent as well.

The translation seems serviceable, and while the action sequences in no way match a master like Robert Crais’, that may be the translation.  The action bits are a tad clunky, but by the time they arrive, you simply won’t care.  I’m truly looking forward to the further adventures of Carl Morck.