There’s a popular nostalgic myth concerning the idyllic nature of small town life in the fifties, back when everybody knew their place and civility and godliness ruled. Of course the truth is considerably more complicated – it’s not always a great thing when everybody knows everybody, and hatred and passion seem to grow more virulently in enclosed places. 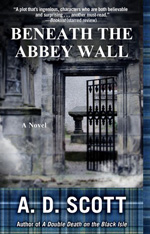 Nobody knows better that there are secrets festering behind even the most proper façade of their small Scottish town than the staff of the local newspaper The Highland Gazette, but even they are shocked when one of their own, quiet, efficient, reserved office manager Mrs. Smart, is murdered, that shock compounded when another staff member, well liked editor Don McLeod, is arrested for the crime, which was evidently motived by a long standing relationship their co-workers knew nothing about.

The murder opens the door to a veritable storehouse of secrets, ingredients author Scott uses to whip up a delicious blend flavored with gypsies, stolen children, an opium smoking, legless war veteran, a nascent rock’n’roller, a fierce Gurkha, and a seductive stranger of uncertain parentage from a distant land (O.K., Canada). The mystery unfolds in the birth tremors of the sixties and the fraught personal lives of the paper’s staff, especially the taciturn McAllister, editor-in-chief, and Joanne Ross, reporter and unconventionally separated single mother. Joanne is the object of her boss’s manfully suppressed desires, but finds herself unable to resist the allure of the mysterious Canadian.

There’s a lot going on, and a confusing number of Mc’s (McAllister, McPhee, McLean, McLeaod, MacKenzie) to keep track of. The end result, while not exactly a cozy, isn’t quite as deep as the author intends, but manages to produce an absorbing and enjoyable read, a well-blended dram of Scotch spirits that will warm up the coldest night. (Jamie)