This is another fun entry in Rhys Bowen’s delightful Lady Georgie series, about the travails of a young woman in the 1930’s who is 35th in line to the throne.  There are references to “Great Grandmother” Victoria and the horrors of Mrs. Simpson.  My favorite in this series, A Royal Pain, involves Queen Mary’s request for Georgie’s help in quashing the romance between Mrs. Simpson and the (then) Prince Edward. 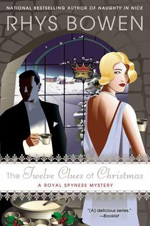 The tone of these novels is lighter and funnier than Bowen’s Molly Murphy series, but like that series, the action revolves around a strong female lead.  Georgie is impoverished and forced to eke out a living in various “lady like” occupations, none of them very remunerative.  In this novel she is rescued from the gloom of her ancestral Scottish castle by an ad asking for a hostess at a country house party.

This has all the classic British village house party elements, with a super high body count.  The murder victims are an array of various villagers, all killed or found dead in odd ways, many of them explainable as accidents.  Georgie has good instincts and an uneasy feeling, however.  Her sojourn is livened by the fact that her scandalous mother and Noel Coward have taken a nearby cottage, and they’re waited on by Georgie’s beloved (though working class) Grandfather.

Luckily for Georgie the dashing Darcy also turns up – he happens to be a cousin of Lady Hawse-Gorsley, the hostess for the weekend.  As the various guests began to appear – including, naturally, a colonel who has been stationed in India – the fun begins.

While Bowen is telling a clever mystery story, she’s also very interested in illustrating the traditions of an old fashioned British Christmas.  There were a few games and traditions that were new to me, and I loved reading about them as I dashed through this enjoyable book.  Clever Rhys Bowen has included an appendix of recipes, games and traditions at the end.   All in all, this is pretty much a perfect Christmas read.