We had a surprise break-out hit last fall with Malliet’s Wicked Autumn. It really shouldn’t have been a surprise, though, because Wicked Autumn, just like A Fatal Winter, is a well crafted British traditional mystery, the kind the Brits themselves no longer seem interested in writing.  (Malliet, like Elizabeth George, Martha Grimes, and Deborah Crombie, is American). But the appetite for this kind of book and storytelling is ravenous. 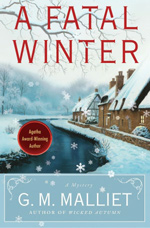 Malliet, referencing both Father Brown and Hercule Poirot in her series centering on Anglican priest Max Tudor (he resembles Hugh Grant), in fact reminds me more of Ngaio Marsh.  Her central character, like Marsh’s Alleyn, is self-deprecatingly handsome, and though he’s not secretly titled, like Allyn (or Mr. Campion, come to that) he does have the secret of being a former member of the MI5.  This adds to his dash.

Max is certainly the center of village delight – every single woman in the parish has their eye on him – but he has eyes only for the lovely and counter-cultural Awena.  In this second outing, there’s even a castle, owned by the deliciously named Oscar, Lord Footrustle.  Lord Footrustle is a bit lonely in retirement, and has invited his far flung family members to join him for Christmas at Chedrow Castle.

Lord Footrustle is quickly dispatched, along with his twin, Laetitia, who has just happened to die around the same time.  That calls in the cavalry in the form of Max, there to help the family with funeral plans, but also to keep an undercover eye out for the local police.  He gets to know all the members of the family, most of whom, for various reasons, hold a variety of grudges.  All of them seem to need money.

In classic British village fashion, the pool of suspects is small but rich, and Malliet obviously has a blast bringing to life the various members of the Footrustle clan.  (I think most memorable for me was Lamorna, but you’ll probably have your own favorite).  Malliet hews closely to the traditional format, even including a summing up with all the suspects present at the end.

She bookends her story with the growing romance between Max and Awena, ending, as all good Christmas mysteries should, at a lively village Christmas party.  Malliet slyly brings this old format up to date – the characters have cell phones, Max was in the MI5, and even the Christmas party is really a winter solstice celebration.  It helps make the village of Nether Monkslip seem to belong to the 21st century rather than the 20th.

I have a few favorite Christmas mysteries – Ngaio Marsh’s Tied Up in Tinsel, Martha Grimes’ The Man with a Load of Mischief, Margaret Maron’s Corpus Christmas, Joan Coggins’ Who Killed the Curate? – and I think Malliet’s delightful novel has earned a place on that shelf.  This is a perfect novel to pick up on a cold winter’s night.