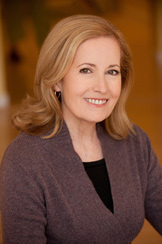 Last year’s Wicked Autumn by G.M Maillet was a break out bestseller for us – I was delighted when I discovered that the second book in the series would be a Christmas book.  Malliet has a love for the English village mystery, a love that’s revealed in her writing.  She graciously agreed to an interview, and a few of the questions are from friend/customer/reader Linda Kimmel (LK in the body of the interview).

Q:  Obviously you are a devotee of the golden age British mystery – Christie, Allingham, Marsh, Sayers, etc.  Though you seem to reference Christie/Poirot most often, I have to tell you I am reminded most of Marsh.   In Overture to Death, Marsh describes her vicar character as having a head “like a Roman Coin”.  You’ve updated and made your vicar resemble Hugh Grant instead of a Roman, but he’s certainly a dish.  Can you talk about that a little bit?

A: Talk about Hugh Grant? How long do we have here? Oh, you mean why I chose to have a handsome vicar as my protagonist… That probably grew out of what I already knew of the women in my book, those who run the village via the Women’s Institute. I suppose I just wanted to throw a cat amongst the pigeons. As soon as these women realize Max is single, they set about trying to find a wife for this gorgeous, charismatic, and very kind man. Those who are already married begin flipping through their rolodexes for any available friend, acquaintance, or relative.

Q:  Why in fact did you choose a vicar for your main character?  Can you also talk about why you gave him an MI5 background?  LK also is wondering if the MI5 background will play more in future books.

A: Max’s MI5 past will catch up with him, absolutely, but perhaps not in the way your customer expects. Max is not a Jack Reacher character although his training does come into play as he solves crimes. As to why I made him MI5: I kept meeting people who juggled various careers in addition to being Anglican or Episcopal priests. It was a trend that carried over several years—it was really just odd that I kept bumping into such people. I was surprised to learn there is nothing to preclude you from being a priest and also belonging to the CIA or FBI; priests are also forensic scientists and members of the House of Lords and doctors and what have you. I just find that fascinating, that people can balance these areas of their lives, and bring one strength to play on the other.

Q:  In the first book in this series, Wicked Autumn, lots of the fun was the tongue in cheek descriptions of the characters, and you obviously had fun creating the village of Nether Monkslip.  Can you talk about where the village came from?  Is it based on something real, or fictional?  St. Mary Mead comes to mind.

A; Nether Monkslip is a composite of every pretty English village I’ve ever visited or seen pictures of. And of course St. Mary Mead played a part, although more for the mindset of the villagers. Mine are fond of one another but at the same time they are into everyone else’s business.

Q:  In this second novel, while you also had some fun with names – Lord Footrustle is classic! – I felt there was a deepening of the way you were writing about all the characters, including Max.  Is this intentional?  Will following volumes be a bit more psychologically oriented?

A; I can’t say I set out to deepen the characters, but the books are at times taking a turn that surprises me.

Q:  I’m assuming you don’t want your books to get too dark – that would certainly spoil the tone you’ve created.  On the other hand, to keep your series fresh and modern, I think you have to flesh out your characters a tad more than Agatha Christie sometimes did.  What are your thoughts on that?

A: I find that the big challenge in writing this sort of book is that while it is on some levels a farce, on another level I am writing about murder and all the complex motives that would lead someone to commit the worst of crimes. I don’t want the humor to overwhelm the plot. But the fact is life is a mixture of light and dark—it’s never all one thing or another, is it? The third book, which should appear in late 2013, is darker in theme, but still has room for some spirited feuding among members of the village’s writers’ group.

Q:  That said, I’m also reminded of Marsh in that she (to my mind) did flesh out a lot of her characters in a very concise and sometimes moving way.  Bunchy in Death in a White Tie always gets me.  He could be a caricature, but he isn’t.  You seem to be able to take a similar path.  Lamorna in Fatal Winter for example could easily just be a “type” but unpleasant as she is, you understand her and feel sympathy for her.  What’s your writer’s “trick” when it comes to that type of thing?

A; First, thank you for these comparisons to Marsh! This is where writers start to sound annoyingly pretentious and woo-woo as they talk about the process of creating settings and characters. The truth is there is no trick, other than the famous advice to just sit down and write until the blood spouts from your forehead or whatever. The most miraculous things come to you as you write, not as you set out to write. I don’t mean to imply a muse arrives in a white flowing gown and takes over the keyboard, but I am as surprised and pleased as I hope anyone is by the ideas that emerge as I write. The characters really seem to come out of nowhere.

Q:  Lots of the traditional British mysteries at the moment are actually being written by Americans (or Canadians) – Elizabeth George, Deborah Crombie, Martha Grimes, Louise Penny.  I guess Caroline Graham would fit in here, but most of the actual Brits are writing such dark stuff I can’t always read it, though I admire it.  What are your thoughts on this?  Why do you think Americans (and Canadians!) have assumed this particular mantle?

A; You’ve just listed many of my favorite authors. Let me say this about Caroline Graham’s Midsomer Murders books: She only wrote a handful and some of the T.V. shows based on her characters don’t really do her credit. The books are enormously funny, with well-realized characters. A particular favorite of mine is Death of a Hollow Man.

I am as baffled as you by the darkness in some modern British crime writing. I suppose Americans have adopted the mantel because we want our U.K. to be cozy and scenic and beautiful, and the people who actually live there know the reality is a bit different. From reviews of J.K. Rowling’s Casual Vacancy, J.K. is portraying the U.K. that is. American authors may prefer to gloss over the crime, the drugs, and the deviancy in the U.K. Perhaps because we have enough problems of our own, and the traditional village books are meant to be an escape.

Q:  And while I usually ask about literary influences, yours are pretty apparent, so instead I’ll ask what’s next for Max Tudor?

Max is back in the village in Book 3, after his adventures at the castle. Here is a synopsis:

Vicar Max Tudor, reveling in his new-found personal happiness with Awena Owen, feels that life at the moment holds no greater challenge than writing his Easter sermon. With Awena away teaching a course at the Women’s Institute college, he looks forward to a housewarming party at Frank and Lucie Cuthbert’s—a dinner party that includes newcomers to the village like West End dramatist Thaddeus Bottle and his downtrodden wife Melinda. But when Thaddeus is found dead in the pre-dawn hours, Max knows a poisonous atmosphere has once again enveloped his perfect village of Nether Monkslip. Connections to long-ago crimes, some sparked by the paintings of a famous local artist, help Max unravel the clues, and restore his and his village’s equanimity.

Q:  And from LK:  First, I’m interested in the writing process itself as it varies so much from author to author. Some authors seem to have a daily routine, while others write when inspiration strikes. I’ve heard some authors state that they develop an elaborate outline before writing a word of the actual book, while others just plunge in and allow their characters to dictate the events. Could you talk a little about your writing process?

A; I have a daily routine but it is not too routine, if you follow. My ideal day starts at the gym, followed by six to eight hours at the computer. I do this six days a week if at all possible. I relax most evenings by cooking dinner, reading, and watching something on cable. It’s really a pretty boring routine: My idea of a perfect day is when I have absolutely nothing else to do but write.

The idea for each book arrives via a slightly different path, but it is generally sparked by a nonfiction book or article I’ve come across, or even by a poem. I don’t outline before I set out—I am incapable of doing that, as I recently learned. I took a playwriting course in which the instructor wanted us to outline before we started writing our ten-page play, but after many false starts what I did instead was write the play and then hand in an outline of it.

People who outline first swear it’s the only way. You just have to know what works for you.

More on method: I tend to have a setting emerge first in my mind. Then I have the means of murder—how the villain thinks he’ll get away with things. Then the characters come along and populate the scene. But the process has been slightly different for each book. There really are no rules.

Thank you for your time, Gen!