It’s not too hard to deduce that old Mr. Private Eye is getting a little long in the tooth. Modern day masters such as Loren D. Estleman are able to cook up a delicious P.I. novel every year, but many of the older crowd, like Robert B. Parker, are no longer with us, while the newer contenders, such as Dennis Lehane and Michael Koryta, seem to have hit the wall. The game’s been going on since Hammett after all, and it seems like most of the gumshoe combinations have been played out. Women writers gave the genre a burst of vitality not long ago when they made Sam Spade into Samantha, but even that sex change has lost its novelty. 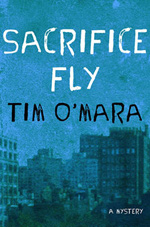 The private eyes that seem to have some pop these days are the reluctant ones, like Steve Hamilton’s Alex McKnight, or those that, while operating in similar ways, aren’t private eyes at all. Brad Parks has begun an excellent series featuring a reporter, allowing his protagonist proximity to crime and mayhem, while still denying him the power and occasionally boring and restrictive paraphernalia of official procedural law enforcement. Now Tim O’Mara has arrived with an excellent first novel called Sacrifice Fly, which is not only one of the year’s best debuts, but one of the year’s best, period.

O’Mara’s hero, Raymond Donne, is a teacher in a bad neighborhood of Brooklyn, providing crime and violence aplenty, but he’s not just a cozy style amateur, blundering into official business, but an ex-cop with a fascinating back story and friends, family and a few enemies still on the force. His earnest attempt to put his past and thirst for justice behind him starts to become derailed when one of his students, a baseball phenom who has a chance to escape the mean streets, suddenly starts cutting class. Ray begins with inquiries only slightly above and beyond the call of duty, but quickly finds himself knee deep in a deadly situation and interfering in a police investigation he finds dangerously halfhearted.

First books in a series are tricky – a neophyte must set up a fictional universe with plenty of room for further growth while still creating a compelling stand-alone experience. O’Mara does all this and more, covering all the bases and swatting a home run in his first at bat. Ray is a complex, wounded, first person protagonist, tormented yet likeable, narrating the events clearly, concisely and with self-deprecating humor. His supporting cast is similarly strong, multi-dimensional and ripe for further development. Ray’s closeness to the situation allows for an emotional wallop that the usual P.I. novel lacks, and I also appreciated that a public school teacher, a favorite punching bag of a certain stripe of politician, can once again be seen as a hero.

So buy a ticket for Sacrifice Fly, an excellent first effort by Tim O’Mara, a rookie who may just prove to be an all-star.  (Jamie)