Mysteries set in the world of music are few and far between, but those that are musically inclined tend to be excellent.  Perhaps it’s because a gifted musician also has some of the skills of a mathematician and so is skilled at assembling a good puzzle, but whatever the reason, the addition of music as a “setting” always adds quite a bit to a good read. 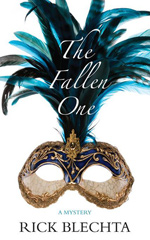 My favorites are Cynthia Harrod-Eagles series where the main character’s partner/wife plays for an orchestra, and Gerald Elias’ wonderful series that reflect his own skills as a classical violinist.  Rick Blechta’s novel, The Fallen One, features a female opera singer.  This was new territory for me, as I’ve seen an opera once or twice – but decades ago – so my knowledge of opera (other than knowing titles of famous operas) is limited.  I enjoyed what Blechta had to share about this art form.

As this is a novel, though, it’s the story that’s important, and Blechta has a great story and a great hook.  His main character, Marta Hendricks, is singing the lead in La Traviata at the Met,  and while she feels it’s going well, she’s getting strange looks from the rest of the cast.  Towards the very end of the performance, one of the other singers whispers in her ear that her husband is dead.  She collapses completely.

This is just the first chapter.  As readers, we see Marta re-building both her life and her career, culminating in a performance in Paris once again in La Traviata. This is a smashing success, as Marta is discovering that her technique must be matched by acting and emotion.  Feeling light and happy, she’s out on the Paris streets when she sees – her dead husband.

She has been in enough therapy to hold on and to call her therapist before she completely falls apart once again.  She continues performing (her therapist is also her voice coach), and she feels she’s worked her way through what was surely her imagination, when she thinks she sees her dead husband once again.

Everything that follows in the rest of the novel – a surprisingly suspenseful tour of Canadian Biker gangs, among other things – comes from Marta’s quest to discover any secrets her so-called dead husband left behind him.  When people Marta questions begin to turn up dead, she ratchets up her investigation.

Along the way she acquires a new boyfriend (also a singer, though not of her caliber), and Blechta is skillful at depicting Marta’s life as a professional musician.  The parts of the story that concerned music were fascinating to me, and the fact that musical instruments are actually used as an escape tool at the end of the novel was both clever and impressive.  I appreciate it when unlikely detectives use their actual skill set to work their way out of a jam.

Blechta combines the skills of a cozy writer – sharp characters, good food, lots of scenic travel – with the skills of a suspense writer.  It’s a nice mix.  Marta is a terrific and well realized character – I recommend making her acquaintance.

A few questions for Rick Blechta…

After I finished the book, I e-mailed Rick a few questions about it.  I was interested that Marta was so wrapped up in her career she was oblivious to the rest of her life – the book is kind of the story of her awakening.  I also wondered why Blechta chose a female character:

I chose a female narrator (not for the first time) because I wanted to change things up. My previous two novels had male narrators. I also needed a character who really was rather naive about the ways of the world. For instance, Marta never once questioned the fact that her husband wouldn’t accompany her anywhere in public, other than to wonder why he would hurt her in that way.

I also asked him about the musical background, which is one of the strongest elements of the book, as well as his particular instrument (he is a musician):

As for my main instrument, it’s French horn and keyboards (along with some trumpet these days). The reason I made Marta originally be a percussionist is because these musicians are very detail-oriented. If there’s any musician who’s dedicated to being perfect, it’s someone who plays percussion. The will spend weeks perfecting a drum rudiment, for instance, or hours learning how to shake a tambourine correctly. This is why Marta has so much trouble letting go and just singing, which is her big Achilles heel. This subplot is aimed more at musicians than the average reader since they’d get this, but even so, it is a bit of personal background (and also a reason for her reputation for somewhat wooden acting) that I hope lends a little more depth to her character. Musicians in the classical genre are generally expected to always be perfect. Marta has a lot of trouble with that.