Jim Huang’s publishing imprint is re-issuing P.M. Carlson’s enjoyable series featuring Maggie Ryan, which begins with Maggie as a student at a small, upstate New York college.  The college is staging Hamlet and has decided to bring in some “real” New York actors to play the main parts, with the students filling out the rest of the cast and supplying the crew. 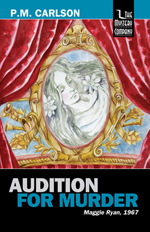 Carlson is an “old school” cozy writer – at times, the situations she is writing about aren’t so cozy, and the world she is writing about, while it has a hook (in this case both academia and the theater), what she’s really interested in are  the characters and their relationships to one another.  This series fits nicely next to Sharyn McCrumb’s Elizabeth McPhearson books or Nancy Pickard’s long lived Jenny Cain series.  There are eight books in this series, with Maggie growing from a young student into a woman, but this first one almost embraces her naiveté.

They are also set in what is now a long ago time period – the students she writes about are living through the Vietnam War, and maintaining an academic deferment is important.  They are the passionate creatures you would imagine them to be, and it’s paired with their very believable day to day college life.  While the war is on the back burner, it’s a hovering presence, though what’s occupying the students in this story is Hamlet.

After reading the book I badly wanted to re-read Hamlet, which speaks to the lively and compelling way Carlson tells her story.  Part of the interest comes from the New Yorkers brought in – Nick O’Connor and his lovely but troubled wife, Lisette.  The scenes of Lisette’s troubles with drugs seem pretty contemporary, and Nick wants to get her away from a bad environment – despite a good job offer – and out into the hinterlands where she can recharge.

As Lisette has been given the role of Ophelia, there are some hurt feelings amongst the college ingénues who wanted the role, making the initial entry of the “New Yorkers” an awkward one, though many of the hurt feelings are soothed both by Nick’s appealing personality and by the fact that Lisette makes a stunning Ophelia.  The students learn lots from the New York actors, as they watch the way they prepare for their roles and absorb Shakespeare’s words and interpret them to the best of their ability.  This really highlights the intellectual side of acting, though it’s also paired with the instinctual.  As with any art form, it’s the right mix that provides the magic.

As the play progresses – Maggie is running lights – the cast and crew begin to gel, though there are bumps and hurt feelings along the way.  When a real disaster strikes and everyone must pull together to get the show on the boards, the true personalities of all the characters are revealed in a moment of stress and working together.  When the inevitable death comes, the aftermath is tinged with very authentic grief.

Carlson’s resolution is properly “mysterious”, and she’s laid out fair clues throughout the text for the reader to follow.  As she gets her own mix of the intellectual and the instinctual right, the result is a pretty magical one.  This is a very enjoyable first in series book, and it makes any reader look for the next one in the series.  Happily there are eight of them to look forward to.