Jennings has a note at the end of this novel about the source of her title – it’s from Dickens’ A Christmas Carol: “…most of all beware this boy, for on his brow I see that written which is Doom unless the writing be erased.”  Jennings skills as a novelist are somewhat similar to Charles Dickens skills, so this is an appropriate quote in many ways.  Her Dickensian talents lie in her ability to create an entire universe within her pages, bulging with characters, none of them – from the central character of Tom Tyler down to a briefly met matron in a bomb shelter – forgettable. 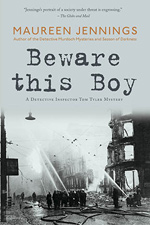 Set inside and around a munitions factory during WWII in the town of Birmingham, England, this book, like the first in the trilogy (Season of Darkness), is female-centric.  As most of the men are overseas fighting, it’s inevitable, but of course Jennings could have chosen the path of utilizing a male (or female) war veteran as her central character.  But she’s more interested in what’s happening at home during the war, which is more uncharted territory.  I think only Christopher Fowler’s Full Dark House and Peter Lovesey’s Rough Cider capture some of the same atmosphere.  Fowler captured the Blitz beautifully; Lovesey, the life of a refuge child sent to live in the unfamiliar countryside.

Her central character, Tom Tyler, is male, but he’s more the calm, observant center of the books (much like Inspector Murdoch is in Jennings’ other terrific series).  While he’s the one that pieces things together and provides a narrative driver in the traditional form of a police inspector,  Tyler has been sent to Birmingham from his homebase of tiny Whitchurch to look into a bombing at a munitions factory there.  As he’s estranged from his wife thanks to events in the first book, he’s happy to take this on.  Jennings has deftly set up her story with a heartbreaking opening in the munitions factory.

She’s very good – great even – at depicting the hustle bustle of ordinary life, and then loading it with meaning by throwing a catastrophe into the mix.  In this case, she introduces us to several munitions workers arriving for their normal shift and then she blows up the factory.  The ripples from the explosion – literally and figuratively – are the source of her story threads.

She uses a family involved in the factory – nurse Eileen lives at home with her parents, her father is a dilly man (explained in the book).  The family also knew some of the girls involved in the explosion. And their lives are upended by the return – unplanned, unwelcome, and illegal – of Eileen’s nephew, Brian.  They harbor him and their struggles as a family to decide what to do with Brian are very real, and very heartbreaking.  Brian may be the “boy” of the title, but so might be Donny, a ne’er do well who is blackmailing Brian’s younger brother and then Brian himself.

The strands of the story are interwoven and each character, rich and nuanced, brings their own problems, worries, and assets to the table.  While there’s a conspiracy as well as a murder in this book, I wouldn’t call it primarily a crime novel.  I’d call it a novel depicting the struggles of ordinary people in extraordinary circumstances.  A perfect Jennings quote is this one:  “The clock on the mantelpiece chimed.  A pleasant, melodic sound that seemed to belong to the world of china teacups and freshly toasted crumpets, not this squalid, dingy room filled with murder.”  The ordinary and the extraordinary, side by side.

Jennings gift of bringing to life the day to day living of people living during a catastrophe is a truly unusual one.  Her prose, her characters, and her skill as a narrator all intersect seamlessly.  This is a novel from a gifted writer and storyteller.