Laura Lippman keeps growing as a writer.  For a reader, this is a true delight, and each novel is something of a surprise.  She’s hewing more, lately, to the standalone model than to the Tess Monaghan novels that started her career, and she has plenty to say.  This novel is both a good story and a nuanced look at ethical behavior and choices. 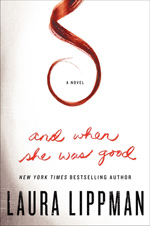 Her central character is Heloise Lewis, who, it quickly becomes apparent, is a high class madam in the Heidi Fleiss mode.  Making the novel a look at the politics of prostitution from the opening scene, Heloise overhears a conversation in line at the Starbucks about the recent suicide of a “suburban madam”.  As she challenges the easy assumptions of the couple behind her in line, she’s really challenging her own assumptions.  The articulation of her thoughts to a strange couple merely starts her own thought process.

Heloise, it becomes very clear, is a very smart and capable woman.  She’s also a very damaged one, and Lippman backtracks through her childhood to show the reader how she’s ended up where she has.  Her father was abusive, both verbally and physically, and her mother stood by and watched.  Heloise gets out and away at an early age, though she segues quickly from stripper to hooker.

It’s when she meets Val, her boyfriend and then pimp, that her life becomes at once more simple and more complicated.  As Heloise is a “favorite” of Val’s, she has a privileged position in his  hierarchy.  It suits her until she wants to start reading books, which she has to do on the sly.

A catastrophic occurrence leaves Heloise visiting Val once a month in the Supermax prison near Baltimore, hiding the fact that she has a child, though not the fact that she’s now a successful madam on her own terms.  While the position of power should have shifted, it hasn’t seemed to, and Heloise is still tithing to her former master.

Heloise, cut off from normal life at an early age, is now trying to live it – and she approaches normalcy like a science, trying to do all the right things for her son.  She’s smart, so she can figure out how to behave and dress correctly, though she still holds herself at arm’s length from the community of “moms”, while at the same time being an almost perfect mom herself.

As her son gets older he starts to wonder more about his Dad, about why there are no family members around, and though he’s not figured out what his mom does, Heloise is starting to think it’s only a matter of time.  Her urgency in figuring out what to do about this is increased by the death of the suburban madam mentioned in the opening chapter and the reemergence of another fellow prostitute from back in the day with Val.

Heloise’s creditors – she has a few – are becoming demanding, and while she’s smart she’s not quite smart enough to escape a few of the traps laid for her.   Lippman’s skill as a psychological suspense novelist dovetails nicely with her look at the life of women.  Her theme seems to be that women, in all kinds of capacities – from stay at home mom to prostitute to even the “average” lobbyist that Heloise pretends to be – are overlooked, diminished.  While you may not always like Heloise you’re still strangely on her side.  You want her to figure out a way out of her troubles, as well as a way for her to behave like a normal woman.

Lippman’s resolution will no doubt stay with you.  Her straightforward prose style cuts to the heart of any point she wants to make, and it’s more memorable because of it.  I can’t wait for what might come next from the interesting and agile mind of Laura Lippman.