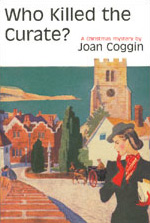 If this isn’t one of the best Christmas reads ever, I don’t know what is (maybe Tied Up in Tinsel, by Ngaio Marsh?). This is a light, funny reissue of a series written in the 40’s about an extremely ditzy socialite who marries a vicar and finds herself very much a fish out of water when she ends up in the English countryside. Imagine her dilemma when the curate is murdered on Christmas Eve – luckily two of her most amusing London pals are on hand to help her solve the crime. There’s more to “Lady Loops” than this precis suggests, though, all of it enjoyable and somewhat indescribable.

If you enjoy Joan Coggin, you may also enjoy Ngaio Marsh, Michael Innes, Cyril Hare, and Edmund Crispin. Or you may enjoy the sparky synergy of Henry and Emmy Tibbets, in Patricia Moyes’ underrated and delightful series. A fun one to start with is Murder a la Mode.