This is the third installment of Rue Morgue’s reprints of Joan Coggin’s four mysteries featuring the ditsy yet strangely knowing Lady Lupin. Lupin is no-one’s idea of a curate’s wife – young, glamorous, and titled – but she mostly takes people unawares with her down to earth kindness and capability in most situations, unpleasant or otherwise. This is the most serious of the three novels so far – the other two are delightfully comic, but in this one, Coggin explores a main character with great delicacy and knowledge of the human heart. It reminded me of Josephine Tey at her best. Lupin and her husband, Andrew, meet Penelope when they go to stay at another parish so Andrew can lead the services there for a Sunday. They also meet Penelope’s appealing brother and sister in law, Dick and Betty. 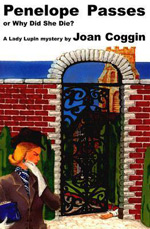 Penelope is a fascinating character, and at first blush, seems to be the kind of virtuous and unselfish person (she’s also beautiful) that it’s almost morally wrong to dislike. And most people – mainly men – seem to adore her. It also appears that she’s given up her own happiness to take care of her elderly parent. As Lupin observes her interactions, however, it becomes clear that Penelope isn’t everything she seems to be, and Lupin begins almost instinctively to dislike her. The feeling slowly becomes mutual for the reader, as this skillful author shows, not tells, the ways in which Penelope is a disagreeable character. You are left to make up your mind for yourself, and any author who trusts the reader that far is aces in my book.

As the title indicates, Penelope dies, and in almost modern style, we are treated to what the aftermath of the death does to the people around Penelope. Lupin goes reluctantly up to Penelope’s house, The Limes, to help out her new friends, Dick and Betty, only to find them strangely changed and hostile to Lupin and to everyone else. Lupin knows something isn’t right even if she can’t quite figure out what it is; and like a terrier with bone, she manages to uncover the truth. All of this is told in the kind of light, humorous style that is a Coggin trademark, but the subject matter in this outing isn’t as light. It gives the book more heft, and makes it a standout in this regrettably short four book series. The fourth one should be out just after Christmas. I’m reluctant to let go of Lady Lupin, though, and foresee having all four volumes in my personal library, for re-reading at will. If you haven’t yet met Lady Lupin yourself, don’t delay – pick up the first – Who Killed the Curate? (2001)