“Mr. Cavarelli slithered in at ten o’clock. He was one of the elegant reptiles from the New York office… Even his suit was a lizardlike greenish brown. He wore alligator shoes, which Helen thought was no way to treat a relative.” 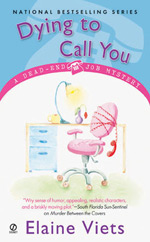 Mysteries involve a certain amount of fantasy. In mysteries written by men, the fantasy element often involves the male character and any female: the women all want to jump his bones. In mysteries written by women, the fantasy is even more basic: food. In Sue Grafton’s books not only does Kinsey Milhone live unencumbered by relatives in an adorable apartment that looks like a ship’s cabin, she can eat fried baloney sandwiches grilled with “a knuckle of butter.” In Elaine Viets’ dandy Dead End Job series, her irrepressible heroine, Helen Hawthorne, lives on “pillowy white bread,” plates of brownies, and endless salt and vinegar potato chips. She also has an ultra cool apartment in a very 50’s Florida building, complete with groovy landlady (Margery, who wears only purple), and furnished with 50’s furniture. The barcalounger in Helen’s apartment is my favorite.

The premise of Viets’ novels is that Helen, hiding out from her ex-husband (to avoid paying him alimony), must work a succession of dead end jobs off the books for cash – so there’s no record for him to trace. So far she’s worked in a fancy dress shop and a bookstore – in this outing she’s got the worst dead end job of all: telemarketer. And not just any telemarketing job – she sells septic tank cleaner – and she’s apparently good at it. At the start of the novel, I was unsure that Viets could sustain an entire book about telemarketing, but she easily does and I think it’s her funniest book yet – I was reading it at the store and snickering embarrassingly loudly to myself. And for Viets’ fans, there a revelation about Phil the invisible pothead (one of Helen’s neighbors) that’s well worth waiting for.

Cozies are the most personal of preferences, I think – there’s no explaining why one person likes, say, Denise Swanson or Elaine Viets novels, and the next person – who may love Mary Daheim – can’t stand either Swanson or Viets. I personally recommend Elaine Viets to anyone who enjoys a fast paced story with lots of subversive humor. In her own way, Viets is as subversive as Carl Hiaasen, as she writes about people who are forced to live on society’s fringes while working like maniacs just to stay afloat and ahead of the rent. And like Hiassen, she delivers her message not with a hammer but with a good laugh.